The Return of Edgar Box 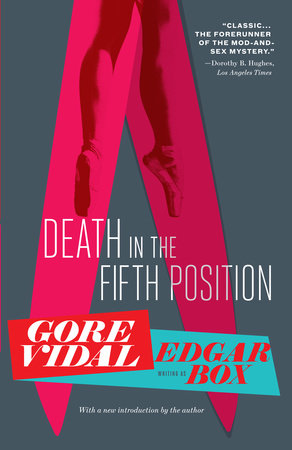 In the 1950s, Gore Vidal wrote a series of stylish mysteries under the pseudonym “Edgar Box.” Now back in print for the first time in thirty years, these thrillers–each starring amateur sleuth and professional P.R. man Peter Sargent II–still crackle.

The first in the series, Death in the Fifth Position is set in the dance world, as Sargent is hired to do press for a ballet company. When the company’s rising star is killed during a performance, Sargent shifts gears and begins to investigate the drama behind the curtain. Click here to read an excerpt.

Death Before Bedtime is the second in the series. Sargent goes to work for a senator looking to make a run for president. When the senator is murdered, Sargent teams up with the police to help find the killer. Click here to read an excerpt.

The final book in the series, Death Likes it Hot, is set in a wealthy beach community. Sargent is hired by a socialite to promote an end-of-summer party, but his fun in the sun is cut short when the socialite’s niece is found dead under mysterious circumstances. Click here to read an excerpt.

Each book features a brand new introduction from Gore Vidal. For more from the man who was Box, click here to read his interview with T: The New York Times Style Magazine.