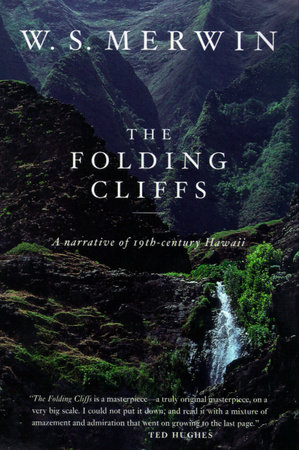 One of the most beautiful works by our nation’s current poet laureate, W. S. Merwin, is The Folding Cliffs: A Narrative of 19th-century Hawaii, which evokes at every turn the uncontainable natural treasures of the poet’s island home. This dramatic and flowing book-length poem is based on the true story of a small band of natives on Kauai, who rebelled when the American government attempted to seize and segregate victims of leprosy, or what Hawaiins came to call “the separating sickness.” Merwin’s main characters are Pilani and Ko’olau, who, with their young son Kaleimanu, escaped to a secret illegal settlement where they hoped not to be taken. In this pair of poems from “Climbing,” the first section in the narrative, Pi’ilani, who has returned years later to find her husband’s grave and is remembering the key events from that time of struggle and flight, revisits the scene of their first experience descending a secret trail into the wild depths of Kauai. (Other characters are mentioned here, including Kua, an older friend who shows them the way.)

It was then that Kua had led Kaleimanu
to the edge of the cliff where the light rose from the valley
and had showed him those two rocks that were the children
of Naiwi and said to him—That is where the right trail
goes down—and he pointed to a thread like a goat track
following the knife edge of one of the fins out in the clouds.
—That is the one that goes all the way—he said—The others
end in nothing—And he hugged the child and told him
—But it is not good to look back—Then he went to help them
load themselves with the few things they would be carrying
Pi’ilani stood looking down at the clear water
gliding in front of her toward the fall its surface
not appearing to move she knelt in the wet moss
to put her mouth to the cold pane and drink from it
with her eyes open at first and then she closed them
and plunged her head and hands into the unseen current
for a long breath overhearing the voices in the water
talking and then she sat up and ate a few pieces
of taro and drank again and lifted her head to stare
at the face below her in the stream with the sky
under it and the eyes burning from their dark places
she looked at it feeling that she knew nothing about it
and then stood up in the day and walked to where the right trail
disappeared over the edge into Kalalau

Learn more about The Folding Cliffs by W.S. Merwin