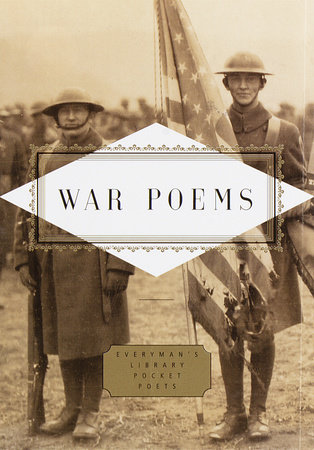 This week marks the 150th anniversary of the first shots at Fort Sumter and the beginning of the Civil War. In 1861: The Civil War Awakening, published this week, the historian Adam Goodheart tells us, “On the night of Friday the 12th, Walt Whitman went to the opera in New York…After the show, the poet was strolling back toward Brooklyn when he heard the shrill cries of newsboys ahead—a rare sound indeed at midnight. The lads came tearing down Broadway…singing out ‘Extry! Got the bombardment of Fort Sumter!!!’ Soon every gaslight on the street had its own little huddle of New Yorkers poring over dispatches from Charleston.” Goodheart goes on, “The news, Whitman would later remember, ‘ran through the Land, as if by electric nerves.'”

In “The Artilleryman’s Vision,” Whitman, one of the great chroniclers of the Civil War, presents a full view of the battlefield in hindsight. (The poem can be found in War Poems, a Pocket Poets anthology that spans the centuries to offer profound works on the subject of war, from Homer and Horace to Stevie Smith and Randall Jarrell.)

While my wife lies at my side slumbering, and the wars
are over long,
And my head on the pillow rests at home, and the vacant
midnight passes,
And through the stillness, through the dark, I hear, just
hear, the breath of my infant,
There in the room as I wake from sleep this vision presses
upon me;
The engagement opens there and then in fantasy unreal
The skirmishers begin, they crawl cautiously ahead,
I hear the irregular snap! snap!
I hear the sounds of the different missiles, the short t-h-t!
t-h-t! of the rifle-balls,
I see the shells exploding leaving small white clouds,
I hear the great shells shrieking as they pass,
The grape like the hum and whirr of wind through the
trees, (tumultuous now the contest rages,)
All the scenes at the batteries rise in detail before me
again,
The crashing and smoking, the pride of men in their
pieces,
The chief-gunner ranges and sights his piece and selects a
fuse of the right time,
After firing I see him lean aside and look eagerly off to
note the effect;
Elsewhere I hear the cry of a regiment charging, (the
young colonel leads himself this time with brandish’d
sword,)
I see the gaps cut by the enemy’s volleys, (quickly fill’d up,
no delay,)
I breathe the suffocating smoke, then the flat clouds hover
low concealing all;
Now a strange lull for a few seconds, not a shot fired on
either side,
Then resumed the chaos louder than ever, with eager calls
and orders of officers,
While from some distant part of the field the wind wafts
to my ears a shout of applause, (some special
success,)
And ever the sound of the cannon far or near, (rousing
even in dreams a devilish exultation and all the old
mad joy in the depths of my soul,)
And ever the hastening of infantry shifting positions,
batteries, cavalry, moving hither and thither,
(The falling, dying, I heed not, the wounded dripping and
red I heed not, some to the rear are hobbling,)
Grime, heat, rush, aide-de-camps galloping by or on a full
run,
With the patter of small arms, the warning of s-s-t of the
rifles, (these in my vision I hear or see,)
And bombs bursting in air, and at night the vari-color’d rockets.

Learn more about 1861 by Adam Goodheart