A Chat With Sue Miller 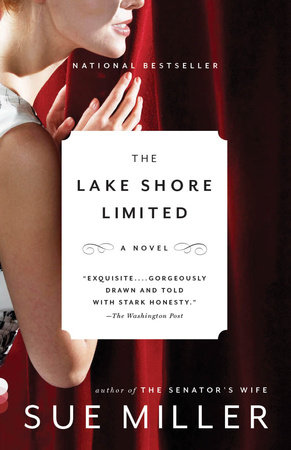 We sat down with Sue Miller, author of The Lake Shore Limited, and asked her about what inspired her to write the novel, how she chose to structure it the way she did, and the ways in which writers borrow from their own lives.

Q: The Lake Shore Limited takes its title from the famous train, but it is also the title of a play embedded within this novel—a play about a terrorist bombing of that train as it pulls into Union Station in Chicago, and a man waiting to hear whether his estranged wife is among the survivors. Billy Gertz, the woman who’s written the play, has waited in just such a way on 9/11 to hear whether her lover, Gus, was on one of the planes used in that attack. Was there one event in particular that sparked the idea for The Lake Shore Limited?

A: Yes. The spark came from a friend who had a relationship that would have ended sooner than it did had not her lover’s brother died on 9/11. While this situation is not like the one I created for Billy, my fictional playwright, the situation started me thinking about the far reach of such an event; and the variety of responses that play out around it, even at some distance. And the way in which the responses may be based in feelings that might be not the expected one—ie., the way in which sometimes we’re called on to enact something we don’t feel, and the discomfort and sense of alienation from ourselves that comes from that.

Q: Much of the book centers around the characters’ reactions to Billy’s play, The Lake Shore Limited. How and why did you structure the book as, in essence, a play within a play?

A: As I began to include some of the lines from the play and create scenes in rehearsal, it began to seem more important to me. It began to seem central to the book, actually. I began to see the book as at least in part a kind of speculation on how the experience of art can be transforming in life—for those who create it, as Billy and also Rafe, the actor, do; and for those who take it in and ponder it and ask about its connections to their own lives. And then, I suppose, I just got interested in the play, too—in writing it, at least the part you read in the book.

Q: Billy Gertz is a playwright. You, Sue Miller, are a fiction writer. There is seemingly much overlap between these two professions. At one point, Billy is having an argument with her lover, Gus. Gus is upset that Billy used a private moment between the two of them in one of her plays. Billy says, “I use me, Gus…. I use me up. I need all of me, and if you’re with me, that means I use you, too. I use everything. How could I not? And what I don’t use, I don’t use because it doesn’t work. Not because it’s sacred…. Nothing is sacred. That’s just the way it is.” Is this a conversation taken from your own life?

A: I had originally thought of making Billy a director, a director who would be working on a play like The Lake Shore Limited. But then I began to think that I wanted the connection between what she was working on and her own experience with Gus to be more than coincidence, or accident, so I made her the playwright. And while I’ve never had exactly the conversation Billy has with Gus, I’ve often thought about what the limits are for writers in terms of what they use of their own lives, and others’. There are obviously great differences in the way writers work with the material they come by through living in families, having lovers and spouses, children, friends—even pets. I think I probably fall about in the middle in terms of making use of such material—not as close to the bone as some, not as distanced as others seem, anyway. In the end, though, we all call up what we know. Perhaps the greater difference then is in the degree of transformation of the material. And perhaps part of the reason I’ve never had the discussion Billy has with Gus with anyone in my own life is that I’ve transformed what I’ve used. The transformation is the point.

Click to read the rest of our interview with Sue Miller, download a reading group guide, read an excerpt from the book, and request an author chat.