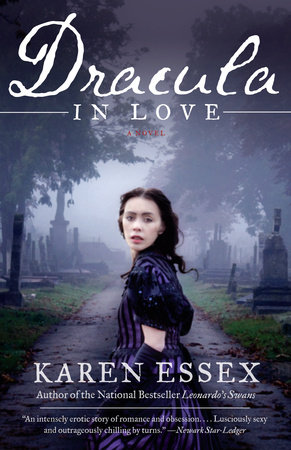 by Karen Essex, author of Dracula in Love

I want to state outright: I revere Bram Stoker. His seminal novel Dracula was a brilliant creation, a haunting and harrowing story, especially considering that so much of what we now know as the “vampire” sprang from his brain. His fantastic book has spawned thousands of variations in movies, books, graphic novels, illustrations, and on and on. But when it came to the women, he wrote like a man of his time, constructing the typical paradigm of bad girl (Lucy Westenra, who succumbs to the vampire’s seduction) versus the good girl (Mina Harker, who does not). The vampire’s seduction was a thinly veiled metaphor for—yes, you guessed it—sex.

My ambition for Dracula in Love, told entirely from Mina’s perspective, was to turn the original story inside out and expose its underbelly or its “subconscious mind.” I wanted to give Mina and Lucy rich, full lives, as well as plausible inner lives, that made sense in the era in which they lived, but also reflected the breadth of women’s desires.

I did extensive research into the late Victorian era but I also wanted to research the history of blood-drinking creatures that evolved into the vampire. Surprisingly, my research turned up a wealth of information that became a major theme. I knew that vampires had a long, rich history dating back to pre-biblical times. What I did not know was that many of the original blood drinkers of myth were female, symbolic of feminine magic and power. I decided to illuminate these historical sources for the vampire, and while doing so, revisit the lost landscape of female magical power.

As I dug deeper into world mythologies, I became fascinated by these bloodsucking goddesses and monsters. These are the true bad girls of mythology—the fearsome Indian goddess Kali, who punished and possessed her enemies by drinking their blood; the vengeful, child-eating, blood-drinking Lamia of Greece and North Africa, who so captivated the pre-Raphaelite artists popular in Stoker’s day; Lilith, Adam’s first Mesopotamian wife, who drank blood in vengeance; and the blood-lusting warrior fairy queens of Ireland. I wanted these sultry sirens in my book, and by God, I did get them in there!

So if the original blood-drinkers were females, then why did Stoker create Dracula as a male? For one thing, mythological stories rarely follow a straight line. Myths are reinvented in every culture, adapted to the needs and beliefs of the people and the times. Through the millennia, concepts of vampires shape-shifted. They were thought to be spirits of women who had been witches; angry plague victims risen from the dead; victims of crime come back to suck the blood of the perpetrators; and succubi who visited men in the night, draining them of their life force (the male spirits who did similar harm to slumbering females are known as incubi).

Then, in what might be construed as a strange twist of fate, to accommodate the Victorian mentality, writers like Mr. Stoker turned the predatory vampire into a male, giving him the supernatural power, with women becoming his victims. The Victorians lived in fear of unleashed female sexuality. To their minds, women were pure and innocent creatures who must remain protected, shielded from worldly life. If women succumbed to sexual lust, orderly Victorian society would combust.

Moreover, sex is power, which was the very last thing the Victorians wanted women to possess. As someone who has made an exhaustive study of women’s history, I cannot think of any period in which women were thought to be as frail as during the Victorian era. I’m certain this was a reaction to the vocal and persistent cries of feminism that escalated as the nineteenth century came to its end.

As a result, suddenly it was the male vampire roaming the foggy, narrow streets of London threatening lovely young ladies like Lucy Westenra, who succumbed to Dracula’s kiss, or the more pious Mina, who resisted him. With Dracula in Love, it was my joy and privilege to infiltrate the original story and promote anarchy. I wanted to turn the old paradigms upside down, and return the ladies to that place of power, lost somewhere in the centuries since Lilith and the Lamia roamed the earth taking their bloody revenge, causing men to quake with fear, and maybe, just maybe, quiver with a tinge of excitement.