Eddie Signwriter: A Guide to a Ghanaian Story 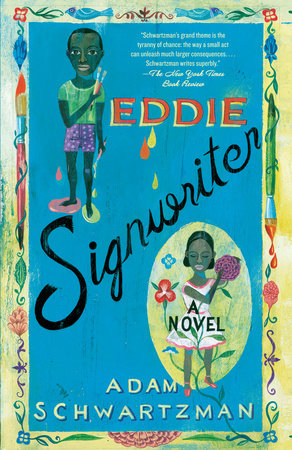 Eddie Signwriter, the debut novel from Adam Schwartzman, is the story of a young Ghanaian man who finds his life altered by forces beyond his control and understanding. Although born in Ghana, Eddie’s family raises him in Gaborone, Botswana. Throughout his childhood, Eddie’s father stresses the importance of not forgetting his cultural roots. If you’re not an expert in Ghanaian history, don’t worry! We’ve put together a brief guide to assist you and your group in understanding Eddie’s homeland.

European influence in Ghana began in the fifteenth century, as traders moved in and established posts on the coastline. Early trade was for gold, ivory, cocoa, and pepper, but in the 16th century, Ghana—then known as the Gold Coast—became better known as a cornerstone of the slave trade. It is estimated that 6.3 million slaves were shipped from West Africa to the Americas before the United States and the British outlawed the importation of slaves in the early 19th century. The British established colonial rule in Ghana in 1821 and maintained it until 1957, when, under the leadership of Kwame Nkrumah, Ghana became the first African country to gain independence from its colonial rulers.

“…his father would begin to tell the story he told every year. Of the petitioners shot down on the street in 1948, where now they’ve built Black Star Square. How Kwame Nkrumah went to prison. How even in jail Nkrumah won the elections, and one midnight in 1957 stood up, it was the moment of Independence, and he said how Ghana would be forever free, he was crying…” (p. 29)

Kwame Nkrumah was the teacher-turned-political leader who led Ghana to independence. In 1948, Nkrumah met with World War II veterans who had been denied benefits upon their return home to Ghana. Some of those veterans marched on the colonial capitol in peaceful protest; three were shot dead. The incident inspired riots in Accra, and six activists, including Nkrumah, were held responsible and briefly imprisoned.

In 1949, Nkrumah founded the Convention People’s Party, a nationalist group with the goal of self-rule. He began organizing non-violent protest throughout the country, and was arrested a second time by the colonial government. By then, however, he and the CPP had gained a large following. In 1951—with Nkrumah still jailed—the British decided to leave Ghana and organized a general election that Nkrumah’s party won handily. Within six years, he succeeded in gaining Ghana’s full independence, and on March 6, 1957, Nkrumah stood up and announced to the world: “We have awakened. We will not sleep anymore. Today, from now on, there is a new African in the world!”

“His parents had been working barely two years when the world for which their education had prepared them changed suddenly…. Instead of the regular programmes Colonel Kotoka starting speaking on the radio. It was six a.m. The president had been deposed while visiting Asia. Flagstaff House was besieged. Those who remained loyal to the president were overpowered, surrendered, or were killed.” (p. 28)

Nkrumah’s early years as a leader were challenging as the first African nation to win independence from colonial rule, they had no roadmap, no model. He clashed with labor organizers, he clashed with his military, he had political enemies arrested and exiled, and he invested in expensive industrial projects that put Ghana into debt. In 1966, while Nkrumah was visiting Asia, Colonel E.K. Kotoka led a military coup against Nkrumah’s government, claiming it corrupt and undemocratic. Nkrumah never returned to Ghana, instead living out the rest of his life in exile.