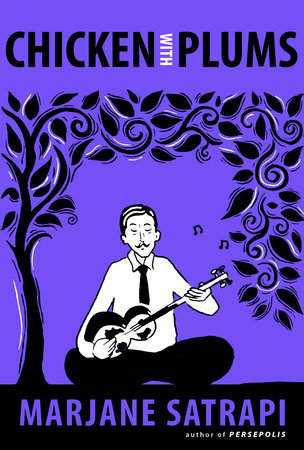 Praised for its complexity and narrative,  prose, and seamlessly powerful drawings, Marjane Satrapi’s Chicken with Plums has been adapted into film and will be contending in this year’s Venice Film Festival.

Chicken with Plums is a moving family story that centers around the author’s great-uncle, a celebrated Iranian musician, who, after irreparably damaging his beloved instrument the tar, renounces the world and all its pleasures. It is an emotional tale of love and family, and life and death.

Marjane Satrapi was born in Rasht, Iran, and is the author of several children’s books, Embroideries, and the internationally best-selling and award-winning comic book autobiography in two parts, Persepolis and Persepolis 2. In 2007, her animated film Persepolis won the Cannes Jury Prize. In 2008, the film Persepolis was nominated for an Academy Award. She is also worked as director for this film.