Tell Us About Your Teen Idol Crush And Win The I Think I Love You Sweepstakes! 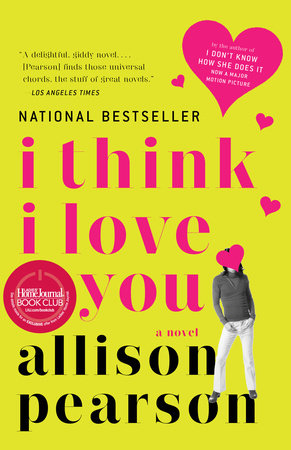 We all had them growing up—those teen idol crushes that filled our daydreams and inspired heated debates at countless sleepovers. To honor this teenage rite of passage, and in celebration of Allison Pearson’s crushworthy new paperback I Think I Love You, we held a contest and asked you to share your stories with us!

Submissions for the contest have closed, and we’ll be announcing the results soon! In the meantime, here are are our very own stories…

Paige S.: “I still remember the first video I ever saw on MTV—the one that started it all. It was ‘Wrapped Around Your Finger’ by The Police. And so began my crush on Sting, which, in all honesty, continues to this day. It began innocently enough in my teens, as I collected albums and memorized lyrics, and it lasted through college, when my best friend and I went on an impromptu search for one of Sting’s homes in the English countryside. And now, here I am working at the company that published his memoir a few years ago. Several times I just missed meeting him in an elevator or seeing him in the lobby…so close! But you never know. Maybe one of these days our paths will actually cross, and I’ll get to meet my biggest crush!”

Meghan D.: “In 8th grade, my favorite thing in the world was to head to the local drugstore and buy up all of the trashy teen magazines in sight—Bop, Big Bopper, Tiger Beat, Teen Beat, the works. My friends and I papered our walls with posters from those magazines. I focused my scrapbooking energies on Jonathan Brandis, the floppy-haired star of Ladybugs and seaQuest DSV. His character on seaQuest was particularly entrancing: Lucas Wolenczak, genius teen runaway. Everything about this character was wish fulfillment. His best friend was a dolphin! His stand-in father figure was played by a gruff Roy Scheider! Eventually, I stopped crushing on Jonathan and just started full-out envying Lucas. He really had it made. And I’ll still watch any Roy Scheider movie!”

Jackie L.: “At my expense, I’ll let you in on something that I’m embarrassed to admit to even my close friends. As a teenager, I was a dork. I adored Star Trek (okay maybe I still do) and you could say I found Leonard Nimoy fascinating. A good friend of my father was also a huge dork like myself and invited me to go to a Manhattan convention with him and a few of his friends to actually meet Nimoy. I took him up on his offer—the tickets were each over $300 (he was able to write them off as company publicity expenses somehow). This won’t come as a surprise, but the whole event was as embarrassing as you’d expect. But, I got to meet Nimoy and was even able to get his autograph!”

Finally, keep an eye out for I Don’t Know How She Does It, the film adaptation of Allison Pearson’s first novel. The movie stars Sarah Jessica Parker and opens on September 16th. Click here to watch the trailer!