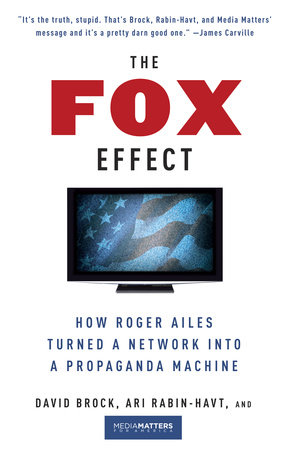 The Fox Effect is a damning indictment of Fox News, based on the meticulous research of the news watchdog organization Media Matters for America, David Brock, and Ari Rabin-Havt. The authors demonstrate how the network, under its president Roger Ailes, changed from a right-leaning news network into a partisan advocate for the Republican Party. For a preview, take a look at the book trailer below.

Booklist calls The Fox Effect, “a highly revealing examination of Fox News…. enthralling reading as we enter the 2012 presidential election cycle.” The book follows the career of Ailes from his early work as a television producer and media consultant for Richard Nixon, Ronald Reagan, and George H.W. Bush. Featuring transcripts of leaked audio and memos from Fox News reporters and executives, The Fox Effect is a damning indictment of how the network’s news coverage and commentators have biased reporting, drummed up marginal stories, and even consciously manipulated established facts in their efforts to attack the Obama administration.