Don Marquis and Archy's "a spider and a fly" 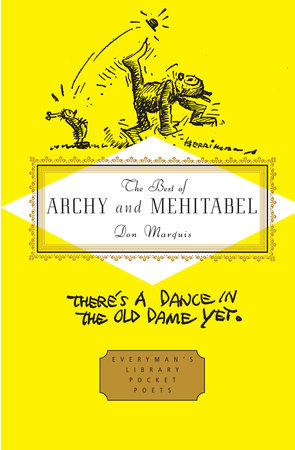 For those who don’t know Archy, he was the cockroach poet who used the typewriter of his “boss,” Don Marquis, a columnist for the New York Sun from 1916 into the 1930s, in order to type out his poems, which then became the fodder for Marquis’s highly popular Sun Dial column. Together with his sidekick, the cat Mehitabel (she claimed to have been Cleopartra in a previous life), Archy discoursed on all manner of subjects, using only lower-case letters and no punctuation (because of his difficulty in operating the shift key). In our new Pocket Poets edition, The Best of Archy and Mehitabel, we reproduce E. B. White’s introduction to a 1950 volume collecting Marquis’s Archy columns, in which he writes, “The creation of Archy, whose communications were in free verse, was part inspiration, part desperation. It enabled Marquis to use short (sometimes very very short) lines, which fill space rapidly, and at the same time it allowed his spirit to soar while viewing things from the under side, insect fashion….Vers libre was in vogue….It was the time of ‘swat the fly,’ dancing the shimmy, and speakeasies. Marquis imbibed freely of this carnival air, and it all turned up, somehow, in Archy’s report. Thanks to Archy, Marquis was able to write rapidly and almost (but not quite) carelessly. In the very act of spoofing free verse, he was enjoying some of its obvious advantages.”

a spider and a fly

you will have to
show me said the spider

Excerpt from THE BEST OF ARCHY AND MEHITABEL © 2011 by Everyman’s Library. Excerpted by permission of Everyman’s Library a division of Random House, Inc. All rights reserved. No part of this excerpt may be reproduced or reprinted without permission in writing from the publisher.

Click here to learn more about Don Marquis’ The Best of Archy and Mehitabel.