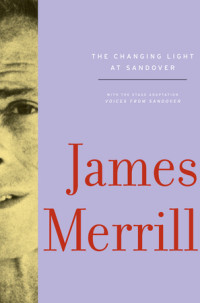 There is nothing else in American poetry like the late James Merrill’s multiple-prize-winning The Changing Light at Sandover, a 560-page epic poem about his evenings spent at the Ouija board with his partner, David Jackson, first published in one volume in 1982. Among other things, it is one of the only accounts of a longtime domestic partnership that we have in verse; as they sit in their candle-lit Stonington, Connecticut dining room, using a five-&-dime Willowware cup as the “pointer” in their alphabetical soundings of the beyond, “JM” and “DJ” learn much about themselves, and process the events of their daily lives as they communicate with the past presences who come to call. Beginning in the summer of 1955, when they first experiment with the Ouija process and meet with their “familiar” and guiding spirit, Ephraim, a first-century Greek Jew, they will make contact with many departed luminaries in the course of their decades-long journey, including Plato, W. B. Yeats, W. H. Auden, and the eminence “God B” (“God Biology”). Readers of the now classic Sandover have often argued about the degree to which Merrill’s account is “real,” but those who knew him still tell how they sat in the dining room and witnessed the cup flying around the board – whether guided by spirits or by poetic genius is perhaps irrelevant now. It is impossible to read the volume without at some point giving oneself over to the radiance of otherworldly lessons, and marveling at this monumental reflection on our endangered efforts to make a good life here on earth.

Throughout the book, Merrill uses upper-case letters to indicate when voices are speaking from the board. Thus Ephraim’s words are given in caps below, in this section which tells of his initial instructional visit with JM (whom the spirits called “scribe”) and DJ (called “hand”).

Correct but cautious, that first night, we asked
Our visitor’s name, era, habitat.
EPHRAIM came the answer. A Greek Jew
Born AD 8 at XANTHOS    Where was that?
In Greece WHEN WOLVES & RAVENS WERE IN ROME
(Next day the classical dictionary yielded
A Xanthos on the Asia Minor Coast.)
NOW WHO ARE U    We told him. ARE U XTIANS
We guessed so. WHAT A COZY CATACOMB
Christ had WROUGHT HAVOC in his family,
ENTICED MY FATHER FROM MY MOTHER’S BED
(I too had issued from a broken home—
The first of several facts to coincide.)
Later a favorite of TIBERIUS    Died
AD 36 on CAPRI    throttled
By the imperial guard for having LOVED
THE MONSTERS NEPHEW (sic) CALIGULA
Rapidly he went on—changing the subject?
A long incriminating manuscript
Boxed in bronze lay UNDER PORPHYRY
Beneath the deepest evacuations. He
Would help us find it, but we must please make haste
Because Tiberius wanted it destroyed.
Oh? And where, we wondered to the void,
Was Tiberius these days? STAGE THREE

Why was he telling us? He’d overheard us
Talking to SIMPSON    Simpson? His LINK WITH EARTH
His REPRESENTATIVE    A feeble nature
All but bestial, given to violent
Short lives—one ending lately among flames
In an Army warehouse. Slated for rebirth
But not in time, said Ephraim, to prevent
The brat from wasting, just now at our cup,
Precious long distance minutes—don’t hang up!

So much facetiousness—well, we were young
And these were matters of life and death—dismayed us.
Was he a devil? His reply MY POOR
INNOCENTS left the issue hanging fire.
As it flowed on, his stream-of-consciousness
Deepened. There was a buried room, a BED
WROUGHT IN SILVER    I CAN LEAD U THERE
IF    If? U GIVE ME    What? HA HA YR SOULS
(Another time he’ll say that he misread
Our innocence for insolence that night,
And meant to scare us.) Our eyes met. What if . . .
The blood’s least vessel hoisted jet-black sails.
Five whole minutes we were frightened stiff
—But after all, we weren’t that innocent.
The Rover Boys at thirty, still red-blooded
Enough not to pass up an armchair revel
And pure enough at heart to beat the devil,
Entered into the spirit, so to speak,
And said they’d leave for Capri that same week.

Pause. Then, as though we’d passed a test,
Ephraim’s whole manner changed. He brushed aside
Tiberius and settled to the task
Of answering, like an experienced guide,
Those questions we had lacked the wit to ask.

Here on Earth—huge tracts of information
Have gone into these capsules flavorless
And rhymed for easy swallowing—on Earth
We’re each the REPRESENTATIVE of a PATRON
—Are there that many patrons? YES O YES
These secular guardian angels fume and fuss
For what must seem eternity over us.
It is forbidden them to INTERVENE
Save, as it were, in the entr’acte between
One incarnation and another. Back
To school from the disastrously long vac
Goes the soul its patron crams yet once
Again with savoir vivre. Will the dunce
Never—by rote, the hundredth time round—learn
What ropes make fast that point of no return,
A footing on the lowest of NINE STAGES
Among the curates and the minor mages?
Patrons at last ourselves, an upward notch
Our old ones move    THEYVE BORNE IT ALL FOR THIS
And take delivery from the Abyss
Of brand-new little savage souls to watch.
One difference: with every rise in station
Comes a degree of PEACE FROM REPRESENTATION
—Odd phrase, more like a motto for abstract
Art—or for Autocracy—In fact
Our heads are spinning—From the East a light—
BUT U ARE TIRED MES CHERS    SWEET DREAMS    TOMORROW NIGHT

Excerpt from THE CHANGING LIGHT AT SANDOVER © 1980, 1982 by James Merrill. Excerpted by permission of Alfred A. Knopf a division of Random House, Inc. All rights reserved. No part of this excerpt may be reproduced or reprinted without permission in writing from the publisher.

Click here to learn more about James Merrill’s The Changing Light at Sandover.