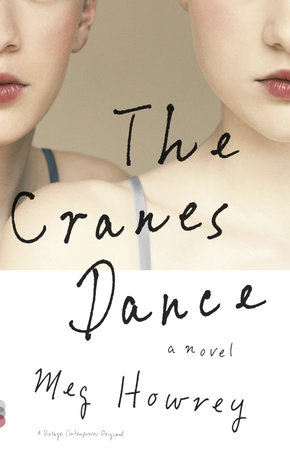 The Cranes Dance by Meg Howrey is the story of Kate Crane, a soloist in a celebrated New York City ballet company who is struggling to keep her place in a very demanding world. At every turn, Kate is haunted by her close relationship with her younger sister, a fellow company dancer who has recently suffered a breakdown and returned home. Funny, dark, intimate, and unflinchingly honest, The Cranes Dance reveals the private lives of dancers and the complicated relationships between sisters. In honor of her behind-the-curtain novel, we asked Meg to come up with a list of her five favorite backstage books.

I love being backstage. I spent a good portion of my life on the performer’s side of the curtain and it never really lost its magic for me. The callboards, the dressing rooms, the black packing cases stenciled in white, the racks of costumes, the wigs, the prop tables. Dressers. Stagehands. Musicians. “Ladies and gentlemen this is your half-hour call. Half-hour to curtain.” The smell of the greasepaint. Actually, I have no idea what greasepaint smells like. Today’s makeup doesn’t smell like much of anything, but the smell of greasepaint figures prominently in theatrical stories written in 1930s England and that’s where I’ll begin my list of five favorite backstage novels.

The first of the classic “Shoes” series. Noel Streatfeild apparently once said of the novel: “The story poured off my pen, more or less telling itself…I distrusted what came so easily and so despised the book.” Pauline, Petrova, and Posy Fossil, three orphaned girls raised as sisters in London, are sent to the Children’s Academy of Dancing and Stage Training in the hopes that they might earn their living as child performers. Pauline is pretty and proves to be a natural actress. Posy is a brilliant dancer. Petrova cares nothing about dancing or acting, and yearns to become a mechanic or a pilot. Pauline and Posy thrive at the school. Petrova is miserable, but carries on in order not to worry the children’s haggard guardian, Sylvia. The lack of money haunts every chapter, and the harsher realities of show business are not neglected. But the books are charming, and one hopes the adoration of generations of devoted readers did something to assuage Streatfeild’s self-criticism, although knowing writers, probably not.

Additional note: Reading the “Shoes” series allowed me, a child growing up in a tiny town in Illinois, to become intensely familiar with Britishisms. I learned that robes were “dressing gowns,” “mean” also meant “stingy,” and elevators were “lifts.” I loved all this as much as the depictions of theatrical life and employed my new vocabulary whenever possible. What the other kids at the Danville Community Pool thought of me referring to my swimsuit as a “bathing costume,” God only knows.

New Zealand-born Ngaio Marsh wrote 32 detective novels, and I read most of them during my freshman year at performing arts school. Marsh’s detective is Roderick Alleyn—posher and sexier than Christie’s Poirot, less fey and chatty than Sayers’ Lord Peter Wimsey. C.I.D. Alleyn knows his Shakespeare and quite a few of the mysteries take place at a theater, giving Alleyn ample opportunity to quote the Bard and sniff out clues hidden under the smell of (you guessed it) greasepaint. My favorite is Light Thickens. The murder doesn’t take place until nearly three-quarters of the way through the book, and by then we’ve had the delight of watching a production of Macbeth take shape in a West End theater. Marsh was a director and producer, and the descriptions here are so vivid and layered that I felt a real sense of loss when the murder occurred. I felt bad for the victim, of course, but quite desolate that the appearance of the actor’s dismembered head during a performance meant that the play had to be cancelled. It sounded like a really good show.

Additional note: More vocabulary came from Marsh, and possibly this was where my preference for spelling words English-fashion was born. Favourites gleaned from these days: “ghastly,” “insufferable,” and “waggish.”

In my late teens I shared an apartment in New York with a girl who was majoring in English at Fordham. She turned me on to Maugham, and I still feel great affection for him. Maugham is famous for having had four plays running simultaneously in London, and actors appear frequently in his fiction. Although he often portrayed them as callow and vain, Maugham’s actors command a certain begrudging respect: if they sin in private life they almost never do against their craft.

This moment from Theatre will ring true for any performer: Julia, the protagonist, is a celebrated stage actress in the prime of her talent and public success. She has an affair with a man half her age, he dumps her for a younger woman, and in a scene near the end of the novel she uses the despair to fuel her performance. Julia pours her wounded heart out on stage, and takes comfort in the fact that she has never “played so magnificently.” This goes on for a few nights until Julia’s director—who is also her husband—comes backstage to castigate her for her performance, calling it “about as rotten a piece of ham-acting as I’ve ever seen in my life.”

Julia fights him for a minute. After all, her performance had been rapturously received with “innumerable curtain calls.” But then—

She thought it over. She knew exactly what had happened. She had let her emotion run away with her; she had been feeling, not acting.

Additional note: Maugham had a Moorish symbol—the hand of Fatima warding off the evil eye–imprinted on the cover of his books. My roommate had it tattooed on her bicep.

Robertson Davies’ first novel about a group of amateurs engaged in putting on a play is both hilarious and touching. Though Davies’ satirical touch spares no one, it is never dismissive. Even the most pretentious characters are treated with a kind of affection, and though we long for their comeuppance, we can’t help wanting to comfort them when it arrives. These are real people and as such they have little self-knowledge, confused and contradictory desires, delusions of grandeur, and sometimes, great kindness. When you have real people attempt a community theater production of The Tempest, you can be assured of wild waters in a roar.

Additional note: A friend of mine invited the locals of her Northern California town to participate in an informal outdoor reading of A Midsummer Night’s Dream. Copies of an abridged version were sent out, parts assigned, and participants told to assemble in a neighbor’s glade. Mingling with the invitees before we got started, I heard many of them express timidity or self-consciousness about reading in front of other people. That lasted about five minutes. Given permission, retired academics, park rangers, and horse vets will emote their mud boots off. It was so successful that they are repeating the evening again with The Tempest, and I hear competition for the good roles is fierce.

Since I live in Los Angeles now it makes sense to include a backstage in Hollywood novel. This one is about a television writer engaged in getting a new half-hour comedy off the ground, written by a television writer of many successful situation comedies. You can basically open it up to any page and start laughing. I will perform this experiment now:

Generally television critics are forgiving of actors and blame everything on the writers. You can watch an actor absolutely sabotage a good script and then read reviews like “Unfortunately, even the impressive talents of Cheech Marin could not salvage Anton Chekhov’s trite and meandering script.”

I’m due for another good backstage novel soon. Since I’ve become a writer the smell of the greasepaint (whatever that is) has gone out of my daily experience. Luckily I still have friends in the business who occasionally send snippets of life behind the curtain. Like my friend up at Oregon Shakespeare who sent me this text yesterday:

Just heard: “Good afternoon ladies and gentlemen. It’s now 12:30. One hour to curtain. Could we have actors to the stage for fight call please. We’ll start with the kids getting killed.”