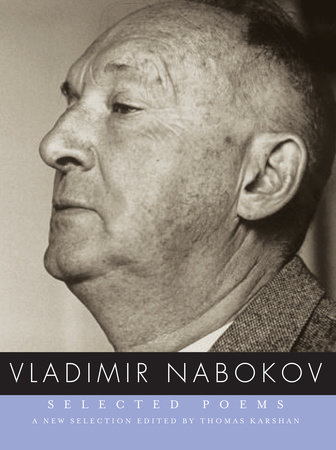 Though we know Vladimir Nabokov as a brilliant novelist, his first love was poetry. This landmark collection brings together the best of his verse, including many pieces that have never before appeared in English.

These poems span the whole of Nabokov’s career, from the newly discovered “Music,” written in 1914, to the short, playful “To Véra,” composed in 1974. Many are newly translated by Dmitri Nabokov, including The University Poem, a sparkling novel in verse modeled on Pushkin’s Eugene Onegin that constitutes a significant new addition to Nabokov’s oeuvre. Included too are such poems as “Lilith”, an early work which broaches the taboo theme revisited nearly forty years later in Lolita, and “An Evening of Russian Poetry”, a masterpiece in which Nabokov movingly mourns his lost language in the guise of a versified lecture on Russian delivered to college girls. The subjects range from the Russian Revolution to the American refrigerator, taking in on the way motel rooms, butterflies, ice-skating, love, desire, exile, loneliness, language, and poetry itself; and the poet whirls swiftly between the brilliantly painted facets of his genius, wearing masks that are, by turns, tender, demonic, sincere, self-parodying, shamanic, visionary, and ingeniously domestic.

Vladimir Nabokov studied French and Russian literature at Trinity College, Cambridge, then lived in Berlin and Paris, writing prolifically in Russian under the pseudonym Sirin. In 1940, he left France for the United States, where he wrote some of his greatest works—Bend Sinister (1947), Lolita (1955), Pnin (1957), and Pale Fire (1962)—and translated his earlier Russian novels into English. He taught at Wellesley, Harvard, and Cornell. He died in Montreux, Switzerland, in 1977.

Thomas Karshan, the translator, is the author of Vladimir Nabokov and the Art of Play and co-translator of Nabokov’s The Tragedy of Mister Morn. Previously a research fellow at Christ Church, Oxford, and Queen Mary, University of London, he is now a lecturer in literature at the University of East Anglia. He lives in London and Norwich.