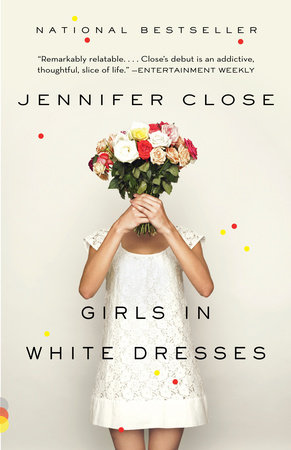 Wry, hilarious, and utterly recognizable, Girls in White Dresses tells the story of three young women grappling with heartbreak and career change, family pressure and new love—all while suffering through an endless round of weddings and bridal showers. In this exclusive essay, Jennifer Close discusses her inspiration for Girls in White Dresses, reveals her favorite part of the writing process, and talks about the response she’s received from readers.

In the summer of 2008, I was a bridesmaid in three different weddings. This meant three different bachelorette trips, three different showers, and (since none of the weddings were in New York) three different trips to celebrate the actual weddings. By June, I was tired. By July, I was exhausted. And by August, I could barely force myself to unpack my suitcase at the end of a weekend trip.

My days were filled with emails about bouquets and matching shoes. I tracked down blow-up dolls and created games for the bachelorette parties. Almost every Monday, I arrived at the office bleary eyed and sleep deprived. Weddings seemed to be all I thought about…even though I wasn’t the one getting married.

Looking back, it’s no surprise that Girls in White Dresses started to come together during that summer. I had all these funny little bits that I’d started writing, but I didn’t know how (or if) they would ever fit together.

One of the first scenes that I wrote featured a group of girls at a friend’s wedding shower. At that point, it was all dialogue—I didn’t even know who was talking! I just wrote down their conversation and it made me laugh, so I saved it.

Isabella was the first character that came to me. I wrote about her visit to her hometown during her first couple of years living in New York. Soon after that, I wrote about Lauren working as a waitress with a bartender that had previously dumped her. Then I wrote the story of Mary and her mother in law, Button.

As I continued to write, the same characters kept popping up. And soon, I realized that these characters were all friends with each other and I began to see it all come together like a puzzle. That was probably the most exciting part of the writing process—it was like everything started to click and I began to understand the friendships of the girls and how they all fit in to one another’s lives and stories.

When I first met my editor, she tapped my manuscript and said, “I know these girls.” I knew then that she was the perfect fit to edit Girls in White Dresses. When the book was released, all I could hope was that when people read it, they would recognize their own friendships in the girls, and see some of the same struggles that they faced or were facing. To this day, nothing makes me happier than when a reader says, “I felt like I was reading a book about my friends.” Every time I hear that, it makes me feel like my book was a success.