Carolyn Cooke On Her Inspiration For Daughters of the Revolution 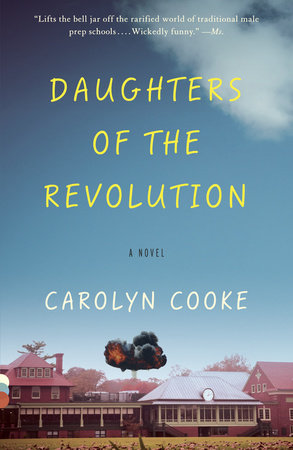 Daughters of the Revolution by Carolyn Cooke is set at a small New England prep school in 1968. Due to a clerical error, the school has admitted its first female student: Carole Faust, a brilliant, outspoken, fifteen-year-old black girl whose arrival will have both an immediate and long-term effect on the school and everyone in its orbit. In this exclusive essay, Carolyn explains her inspiration for the book and the significance of its setting.

For me, Boston had always served as a confusing symbol, like the quincunx pattern on a turtle’s back, or the moment in James Joyce’s story “The Dead” in which Gabriel recognizes his wife on a staircase after a party as a charged, essential symbol—but of what?

Boston was busing, blue laws, and the spectacle of the bicentennial; elitism coupled with a relentless frugality; Boston was Lowells and spiritualist temples; it was the racism and snobbishness which prompted the radical journalist Andrew Kopkind to remark in the 1970s that “Boston is America—but worse.”

I spent the summer of 1997 in a stranger’s apartment on Beacon Hill, in the belly of the beast. The bedroom looked directly over the State House. Every morning at 4 a.m. the sun rose just behind the gold dome, the celestial orb eclipsed by the more well-placed Brahmin one. Old world and new kept colliding, and I felt moved to document the fallout. I worked on my laptop in a boîte called Curious Liquids on the corner of Park and Beacon Streets because I did not for a month dare to present myself as a candidate for membership at the Boston Athenaeum next door. Instead I lurked around the venerable building. How to penetrate? (My novel was at that time called Athens of America, and I felt it must be written at least partly in The Zone.)

I walked in circles through cramped, historic streets around Old South Church, Filenes’s Basement, and the cemetery where Crispus Attucks is buried. Finally I pounded on the door and begged to be let in. It turned out that joining the Athenaeum was like joining a health club—intimidating and expensive, but suddenly easy.

The class-riddled, elitist, sexist world in furious opposition to which I had forged everything that mattered to me did not dissolve as much as it changed into something else. Even Curious Liquids proved a harbinger of the new hipster chic that was about to engulf the city and turn South Boston, for example, into a design mecca. This revelation brought me closer to God—I mean, to the character in the novel who goes by that name. The creep of history, the threat of total annihilation by time is his problem, too.

I wanted to convey in my book an atmosphere in which enormous social changes—coeducation, integration, sexual revolution—felt new and irreversible. I wanted to reopen the window that brought shocks of fresh air between the era of The Joy Of Sex on our mothers’ coffee tables and AIDS on the cover of Time Magazine.

One day at lunch I took a walk and came upon a scene (exactly as described in the novel), of twelve or fifteen men and women, black and white, powdered and dreadlocked, representing a fife and drum corps outside the Old City Hall. An old veteran held a Red Sox cap to his breast and wept at the tinny revolutionary music. It was wonderfully unclear whether the scene represented homage, reenactment, performance art, or parody. The line between fact, fiction, delusion, aspiration, and desire blurred into what eventually became Daughters of the Revolution.