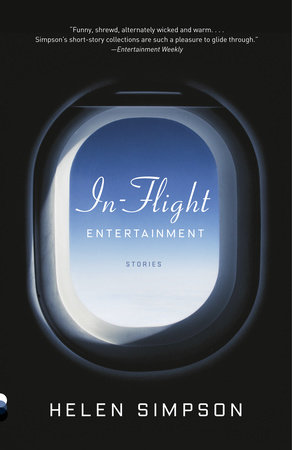 In-Flight Entertainment is a dazzling collection of stories from internationally acclaimed writer Helen Simpson, touching on everything from global warming and technology to health and aging to marriage and family life. Whether Simpson’s subject is single women or wives, marriage or motherhood, youth, young love, homework or history, these thirteen short stories make for addictive reading that walks a line between being wickedly funny and dark. In our Q&A, Simpson discusses what inspires her and her only rule for short stories.

Q: In a discussion of your previous collection, you wrote that the only rule you’d been able to come up with for short stories is: “Something’s got to happen but not too much.” Do you still find this to be true? Do readers ever write to you wanting to know what happened next to the characters in a story?

A: Yes, I think that still holds true for me. It’s almost impossible to lay down the law about the short story form because it’s capable of such variety. That’s also why story collections are harder to sell, of course—because of their very variousness they’re far more difficult to describe or review than novels. With a collection of stories of varied tone and voices and different subject areas, how is it possible to sum it up in a few words?

And yes, readers have occasionally asked about what happens next to the characters in a particular story. The simple answer is: I don’t know.

One of Katherine Mansfield’s most anthologized stories is “The Daughters of the Late Colonel,” and at one point she commented, “Even dear old [Thomas] Hardy told me to write more about those sisters. As if there was any more to say!” It’s lightness of touch you’re after as well as power.

Q: Many of the issues that you discuss through your stories are ones that readers will personally identify with—such as child rearing, caring for an elderly parent, relationship troubles—albeit with a twist. Do you write stories with your readers in mind or do just pick up themes and ideas to incorporate into your work from daily life?

A: Yes I do draw on daily life, but in the sense of, “Oh, that’s useful, I’ll have that.” More than a decade ago a stranger died near me on an aeroplane; it was distressing and sad at the time, but the writer in me stored it away for later. Years on it became the central incident in the title story here. But this sort of useful event or scene can equally well appear in a dream—a fair number have to me. So, yes.

In a way, though, I imagine short stories are less likely to be autobiographical than novels—by their nature they are likely to draw more heavily on generic experience and less on the idiosyncrasies of individual characters. (More than a little character exploration in a story and you’re edging towards a grotesque.) The stories I’ve been interested in writing recently have been those where the experience is common or typical—as in a song; that way you can cut down on names and status details, particularly if the story is very short (for example, “Charm for a Friend with a Lump”). Although of course the minute I say that I think of other sorts of story where the interest lives in precisely those details…