Rave Reviews for A Hologram for the King by Dave Eggers 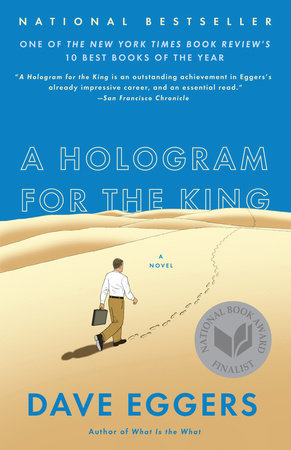 Alan Clay is a self-employed consultant whose personal life is a mess and whose financial situation is even worse. He has just arrived in the Kingdom of Saudi Arabia, where he awaits a meeting with the king himself. If all goes well, Alan will be flush and successful for the first time in years—he will even be able to pay his daughter’s college tuition so she won’t have to drop out. Days and weeks pass, and the king does not arrive. Yet Alan hangs on because he has no choice: his survival depends on this deal.

In A Hologram for the King, Dave Eggers takes us around the world to show how one man fights to hold himself and his splintering family together. It’s a book that’s sure to get your book club talking—and it’s inspired raves from critics. The novel was named a finalist for the National Book Awards, was dubbed one of the Top 10 Books of the Year by the New York Times Book Review, and earned Best Book of the Year nods from The Boston Globe and San Francisco Chronicle! Below, we’ve collected quotes from some of our favorite reviews:

“A Hologram for the King is an outstanding achievement in Eggers’s already impressive career, and an essential read.” —San Francisco Chronicle

“[A] clear, supremely readable parable of America in the global economy that is haunting, beautifully shaped, and sad…. A story human enough to draw blood…. Groundbreaking.” —The New York Times Book Review

“Dave Eggers is a prince among men…. A strike against the current state of global economic injustice.” —Vanity Fair

“A comic but deeply affecting tale about one man’s travails that also provides a bright, digital snapshot of our times.” —The New York Times

“A novel poised on the central meridian of our times…. Eggers maintains an exquisite balance of irony, empathy, dark humor, and unexpected tenderness in this taut exploration of the ever-increasing price of ordinary survival. A book as heartbreaking as the global economy it explores with such beauty and ferocity.” —National Book Awards citation

“Eggers, continuing the worldly outlook that informed his recent books Zeitoun and What Is the What, spins this spare story—a globalized Death of a Salesman—into a tightly controlled parable of America’s international standing and a riff on middle-class decline that approaches Beckett in its absurdist despair.” —The New York Times citation for Best Books of the Year