In this Reading Group Center exclusive, Susan Conley shares how maps played a significant role in the development of her novel Paris Was the Place. From the protagonist to the narrator, she thoroughly researched the streets of Paris in order to provide a sense of place for the reader. Learn more in Conley’s essay below and continue reading for excerpts from the novel.

Writing with a Sense of Place:
Making Novels. Making Maps.

In many ways my novel Paris Was the Place is a love letter to Paris—the Paris of navy berets and good, soft cheeses but also of vegetable curries and working class immigrant neighborhoods. Maps are woven into almost every chapter of the novel. My narrator’s slightly crazed father even makes maps for a living. Also, many of my characters are displaced—from their home countries, from their families. So, as much as my novel is about Paris, it’s also about what happens when we’re separated from places (and people) we know and love best.

I knew that to imbue the book with a real sense of place, I had to know my landscape cold. I’d lived in France and I’d traveled throughout the country a whole lot. But what was the name of the second stop on the Metro line that my narrator took to get to work at the school in the 9th Arrondisement? Where did she buy wine? What roads did she take to the hospital when she had to drive her brother there after he got sick? These were all things the novel needed to answer.

Place was the door through which a reader would enter the novel. When place was really working for me, when I was able to achieve liftoff and make Paris come to life, then the city acted as a fully realized character in my novel and did a lot of work. By capturing place—a tiny, cave-like jazz bar in Paris’s 6th Arrondisement, where the walls are made of damp limestone—I was able to capture locale and cultural tone, and, perhaps most importantly, mood.

I researched Paris for months while I was writing the novel. Then I found some old poster board in my basement and got down on my hands and knees in the little attic office of our old Maine house, and I began drawing in minute detail the places that my characters lived and worked and orbited in France. 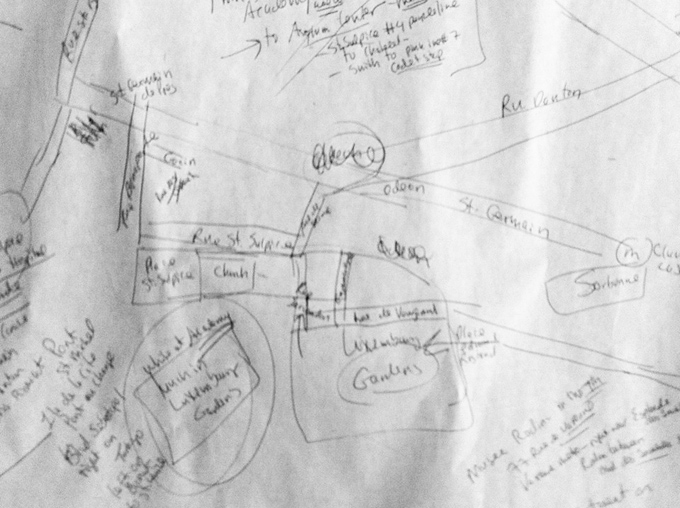 This map is completely out of scale. Its labels look like they were written in a language called chicken scrawl. But I studied it every day while I wrote the final draft of the book. It became more important to my writing than the three different laminated Michelin maps of Paris that also lay open on my floor. I added to my hand-drawn map every day with black magic marker; and I realized things about my characters as I did this: why they got lost when they drove to the airport. How they knew spring had arrived because of the blooming magnolia trees they passed by in the neighborhood park. How much they loved Paris and had fully made it their home. My map showed my novel the way.

Excerpt 1:
I try taking Boulevard de Strasbourg away from the crowds at the St. Denis metro stop to find the girls. This isn’t one of those gilded Paris streets heralding the end of a war or the launch of a new haute couture line. The sky’s already turned gray again, but it’s flanged lilac in places. The early dusk settles around the Beauty for You hair salon and a small pyramid of green-and-white shampoo bottles in the pharmacie window. I’m almost lost but not entirely, searching for an asylum center full of girls on Rue de Metz. Two mothers in saris pick over veggies while their toddlers jump in place on the sidewalk holding hands. A tabac sign yells LOTTERY FRANCE!

The sequencing of the neighborhoods here baffles me—arranged like the curvature of some terrestrial snail. I’m in the tenth arrondissement, anchored by two of Paris’s great train stations, where the alleyways weave into mapless places. I’m not embarrassed to carry my Michelin. But it’s colder here at four o’clock in January than I ever thought it could be, and three of my fingers have gone numb.

My lunatic father has spent his whole professional life drawing maps. He’s older now. Where, I don’t know exactly. But I feel him with me today while I walk. A high white cement wall runs along the start of Rue de Metz—a one-way alley off Boulevard de Strasbourg. Four blue suns have been painted on the wall and the bodice of a woman’s lime green dress. The end of the wall is a deeper cerulean, and the graffiti here looks done with chalk—spaceships and loopy sea creatures and messy stars.

Number 5 is a low, two-story brick interruption after the wall with an airport orange wooden door and a bronze plaque the size of an Etch A Sketch that reads ÉCOLE PRIMAIRE. Primary school. But this can’t be a school anymore, can it? Unless I’ve been sent to the wrong place? Two bow windows sit on either side of the door like eyes on a face, and the door itself is like a mouth that might try and eat you.

Excerpt 2:
I get off at the Gare du Nord—loud cavern of steel and glass—and climb the stairs to Rue du Faubourg St. Denis, which runs along the east side of the station. I’m late for dinner with Luke. The sidewalks are even more crowded with shoppers. We’re still in the tenth but farther north. The train station shadows long banks of dove-gray apartment buildings with wrought-iron balconies and cafés with scalloped awnings. The rain’s stopped but not before it froze on the icy sidewalks, and the wind has only picked up. Dark limbs of chestnut trees rock back and forth up near the highest apartments. And this is a different Paris than even this afternoon. The city changes faces.

Click here for a Reading Group Guide and more on Paris Was the Place.