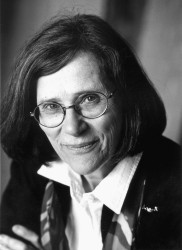 In the Fall of 2014, Knopf will publish a new book by acclaimed biographer Hermione Lee: a vivid, intimate, and critically acute portrait of Penelope Fitzgerald–one of the finest and most understated novelists of the twentieth century.

Penelope Fitzgerald was a great English writer–many say the greatest in recent years–whose career didn’t begin until she was nearly sixty. Her novels went on to win some of the most coveted awards in literature: the Booker Prize and the National Book Critics Circle Award. Hers is a story of lateness, persistence, and redemption.

A Fitzgerald novel is a short, spare masterpiece: subtle, understated, and highly intellectual. The early novels draw on her own experiences–a boat on the Thames in the 1960s; working at the BBC in war time; a failing bookshop in a Suffolk; an eccentric stage-school. Her later books open out into historical worlds that, magically, she seems to entirely possess: Russia before the Revolution; post-war Italy; Germany in the time of the Romantic writer Novalis. Now, Hermione Lee–a master biographer, an Oxford head, and one of Fitzgerald’s greatest champions–gives us this remarkable author’s unforgettable story.

PENELOPE FITZGERALD: A LIFE has already been published in the UK to great acclaim:

“A riveting biography…Gloriously illuminates the separate talents of two distinguished ladies of letters.” —The Economist

“Excellent…Lee was a perfect choice as Fitzgerald’s biographer. She has done a superb job, capturing an elusive personality and a complex, sometimes rather harrowing story.” –Philip Hensher, The Guardian (London)

“Deliriously entertaining…Beautifully evoked…[Lee’s] intense, close-up analyses of each book would have thrilled Fitzgerald, while her passionate feminist sympathy for the intellectual bombshell turned bag lady reads very much like (Penelope’s own phrase) ‘a squeeze of the hand’ down the years.” –John Walsh, The Sunday Times (London)

“A perfect literary biography…Brilliant social history…I could not put down Lee’s comic-tragic account…Lee catches not only the tempo of each decade, but how values from Fitzgerald’s past constantly inform her present…Lee plumbs the creative mind beneath [Fitzgerald’s] persona, tracing the metamorphosis of messy experience into crystalline art.” –Jackie Wullschlager, Financial Times