WHAT: PROBLEMS WITH PEOPLE, stories

WHERE: The author lives in Washington State.

WHY: “Guterson is celebrated for his deeply atmospheric novels, and his electrifying short fiction is equally impressive.
“Whether it’s the utter disdain a successful son feels for his nattering mother or the unavoidable anguish an elderly father experiences at not being able to reunite with his peripatetic son, missed connections often take center stage in award-winning novelist Guterson’s second short story collection.
“In ten perceptive tales he explores the monumental and circumstantial episodes that form the underpinnings of daily life. There are petty jealousies and niggling insecurities, long-held grievances and newly-minted outrages. There are memories that blur when the past and present collide, conjuring up images of good times and bad for fathers and sons, husbands and wives, friends and strangers. Through them all, Guterson’s protagonists confront life’s challenges with something like aplomb, if not outright skill, and in doing so, often uncover unsuspected silver linings in otherwise darkly cloudy situations.
“While most stories are set primarily within the familiar landscape of Guterson’s native Northwest, several venture farther afield to Germany, Nepal, and South Africa to further highlight the universality of emotional connectivity.” —Carol Haggas, BOOKLIST

“A haunting collection from a thoughful storyteller.”
—Donna Bettencourt, in a starred review for LIBRARY JOURNAL 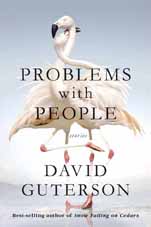 From the beginning of the book: They went in late September, starting out on I-5, which she handled by staying in the right lane with ample braking distance, keeping her hands at nine and three on the wheel, and disdaining speeders and tailgaters. No problem there — he found her driving style charming enough. She was a silver beauty in a dark-blue Honda Element — one of those boxy, hip-to-be-square cars — with nearly inaudible public-radio chatter on fade, and all of that was fine, too. She wore a jean jacket with mother-of-pearl buttons, an ironed pastel shirt, and suede lace sandals. Her eyes were green, her smile was warm, and she didn’t talk just to fill space. She seemed self-sufficient but not cold about it. In her politics, she was not so liberal as to be obnoxious, but not so conservative as to suggest one-upmanship. She didn’t pretend to be an organic farmer, kitchen goddess, world traveler, yoga master, or humanitarian.