Media Center: For Love of Country to be published by Knopf in November 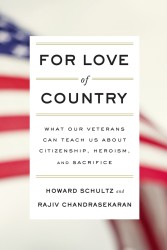 June 30, 2014—Howard Schultz, chairman, president and chief executive officer of Starbucks Coffee Company (NASDAQ: SBUX) and Rajiv Chandrasekaran, senior correspondent and associate editor of the Washington Post, have written a book portraying the extraordinary contributions veterans of the wars in Iraq and Afghanistan have made both on the battlefield and at home. FOR LOVE OF COUNTRY: What Our Veterans Can Teach Us About Citizenship, Heroism, and Sacrifice, will be published by Alfred A. Knopf on November 4, 2014. The announcement was made today by Sonny Mehta, Knopf’s Chairman and Editor in Chief.

FOR LOVE OF COUNTRY includes profiles—many never-before-told—of veterans who have committed acts of extraordinary valor in Iraq and Afghanistan: we meet an orthopedic surgeon who joined at 60 after losing a son in Iraq, and went on to save dozens of lives in the field; an army sergeant who ran into a hail of gunfire multiple times to save his comrades; two Marines who stood and defended their outpost from an oncoming truck bomb rather than running to safety, losing their lives while saving thirty-three others; and a captain who, when her convoy was attacked, executed a counter-attack and safely returned her men to base. The book also profiles veterans who are using their leadership skills gained in the military to strengthen and rebuild our nation: a general seeking to find new ways to treat brain injuries; an army spouse counseling wives whose husbands have sustained life-altering injuries; former soldiers helping residents dig out after natural disasters, and those helping turn around inner-city neighborhoods.

“FOR LOVE OF COUNTRY tells stories of the service and heroism of the men and women of our nation’s forces while highlighting their considerable leadership, discipline and citizenship as they move forward on a new mission—to continue serving society as the next greatest generation of American veterans,” said Schultz. “Given that less than 1% of our country has served in the military conflicts of the last decade, this is a time in America when it’s crucial to bridge the divide in our society between our civilian and military populations.”

“Most Americans have no personal tie to this generation’s veterans,” said Chandrasekaran. “FOR LOVE OF COUN 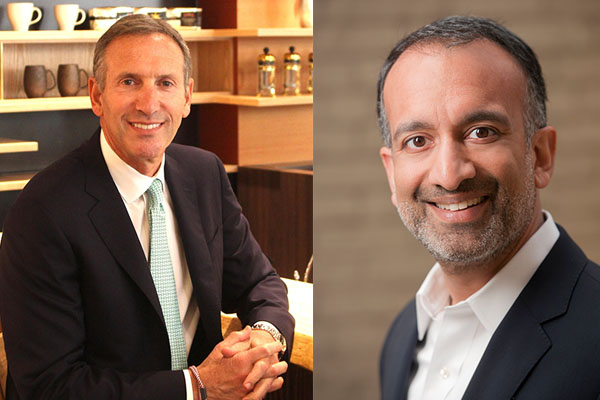 TRY will show civilians not only the heroic feats of our troops during wartime, but how they are making our nation better upon their return, shattering stereotypes of the broken, angry veteran.”

Schultz, who is also co-founder of the Schultz Family Foundation, and Chandrasekaran plan on donating the proceeds to veterans service organizations focused on successful transitions for post 9/11 veterans and their families. They will be making national media appearances at the time of publication.