Case Closed: The True Story of a Happy Ending 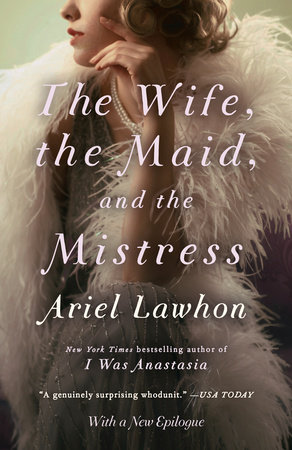 The true-life 1930 disappearance of New York judge Joseph Force Crater remains a mystery to this day, but not so in Ariel Lawhon’s finely plotted novel, The Wife, the Maid, and the Mistress. In Lawhon’s version of the story, which skillfully blends fact and fiction, the three women in the judge’s life hold the key to the truth. According to the historical record, Crater’s rumored mistress, a popular showgirl named Ritzi, was one of the last people to see him alive. She vanished without a trace shortly thereafter. And so Lawhon let her fancy run wild, filling in the missing details of Ritzi’s story. Little did she know that the fate she’d written for Ritzi was closer to the truth than she could have imagined.

The Wife, the Maid, and the Mistress is now available in paperback. Read the author essay below, then enjoy an excerpt from the novel and print our reader’s guide.

Hello, I’d like to find out where you did your research for your book about Judge Crater? You see, the showgirl depicted in your book was actually my grandmother . . . .

So began an email that I received on May 16, 2014. There are certain moments that writers do not forget. Your first good review. Your first bad review. Finally holding the book you’ve labored over in your hands. But I am convinced there is nothing that will send you into total body failure so fast as receiving an email from someone who shouldn’t exist. Because that showgirl I wrote about, the one I’d researched and brought to life on the pages of my novel? The one whose granddaughter had just written me? I truly believed she had died in the fall of 1930. She shouldn’t have lived long enough to have children, much less grandchildren. But that email turned all my personal theories inside out.

My first introduction to Sally Lou Ritz (I would later find out her last name was Ritzi—the nickname I used for her in my novel) came ten years ago while reading an article about a missing New York State Supreme Court Judge. Though we’ve largely forgotten him, Joseph Crater was nothing short of legend for almost fifty years. He’d only been on the court four months when he got into a cab on August 6th, 1930, and vanished. His disappearance became the biggest missing person’s case of the twentieth century, thanks in no small part to his connections with Tammany Hall, infamous gangsters, and rumors of judicial corruption. It didn’t take long to discover that there were three interesting women in Judge Crater’s life: his jaded, socialite wife Stella; a devoted maid who was in their apartment in the days surrounding his disappearance; and a showgirl named Sally Lou Ritz, long suspected to be Crater’s lover. A wife. A maid. And a mistress. What if all three of them knew what happened to him but chose not to tell? Now I had a story.

But the difficulty in writing about historic figures is that you must treat them with respect. Their legacies and their families and their memories must be honored. Despite the fact that they felt like characters to me, they were real people. And there could be men and women wandering around the planet that knew and loved them. I don’t believe that writers must always paint their characters in a positive light—especially when history supports a gritty version of events—but I do believe they should be treated with dignity. And I was determined to be mindful of that responsibility.

Yet here’s the truth: in this particular situation I felt as though I’d gotten off easy. Joseph and Stella Crater never had children. The maid, known only as Amedia Christian (I changed her name for the novel) makes one appearance in one newspaper article and no one knows for sure if that was even her real name. And the showgirl vanished shortly after Judge Crater. She’s been listed as a missing person for the last eighty-four years. I stayed with the facts that could be verified. But beyond that, my imagination had room to play. Joseph Crater’s disappearance is still unsolved. No one knows what became of him. So I used these three women to tell a version of events that could have happened. And I was very pleased with how it turned out.

And then came that email in May.

Ritzi’s granddaughter went on to tell me that her grandmother had left New York City in fall of 1930. That she had changed her name. Married. Had a child. She had gone on with her life and never once mentioned that she was with Joseph Crater on the night that he disappeared. Or that she had been in any way connected to one of the most notorious missing persons cases in history. Her children and grandchildren knew her simply as a beautiful, talented, charming woman who shied away from personal questions. She died in 2000 after living a full, happy life.

Even though I sincerely believed that Ritzi had not made it out of New York City alive, I wrote her a different ending. A happy one. I gave her a family. A new name. I wanted those things for her. And I was brought to tears by the knowledge that she actually got them.

I spent several weeks this summer communicating with various members of Ritzi’s family. I’d gotten many things right. Her real name for instance: Sarah (she went by Sally). Some things I’d gotten wrong. She fled to California, not Iowa as I’d imagined. But the thing that humbled me most was that her son, granddaughter, and great-grandson had a few more answers than they did before. Much of what I wrote about her was total fiction. But I was able to point Ritzi’s family to the historical record of her time as a dancer on Broadway, to her connection with Judge Crater, and to testimony she’d given police about his disappearance.

Questions were answered. (For them and for me.) Gaps were filled. And a legacy was discovered. To me that is a better ending than anything I could have written.