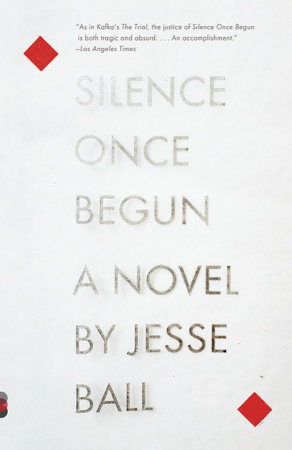 “The following work of fiction is partially based on fact,” Jesse Ball informs us at the beginning of his finely wrought new novel, Silence Once Begun. He blends fact and fiction so masterfully that it’s hard to tell them apart. The resulting ambiguity is at the core of Ball’s multifaceted novel.

The narrator—a journalist who’s also named Jesse Ball—is investigating the mysterious disappearance of eight people outside of Osaka and the innocent man who willfully confesses to the crime. Within the novel’s pages, readers will find eerie black-and-white photographs (take a look at the image gallery below) that the author himself took during his travels to Japan. These images appear by themselves, without captions or footnotes, further blurring the line between fact and fiction, author and narrator. Not to mention that the style of the novel borders on documentary, featuring interviews and transcripts that add yet another layer of complexity to the story.

Under the spell of Jesse Ball’s writing, we forget that Silence Once Begun is ultimately a fictional work. The Japanese underworld that he portrays is incredibly vivid and yet very much a product of the writer’s sleight of hand. In an interview for The Paris Review, he explains this paradox:  “I don’t really think Silence Once Begun takes place in Japan so much as it takes place in this imaginary Japan. It’s more like Kafka’s Amerika to America. It isn’t really America, so much as a fictional place.”

Ball conjures surrealistic visions of our world that question the very nature of reality. Combined with the conflicting accounts of the crime, they will lead reading groups into a discussion about the experimental narrative form and the meaning of truth in the novel. Complex themes, certainly, but your discussion will be all the more rewarding for it!

Image Gallery
Click the thumbnails below to view an enlarged version: