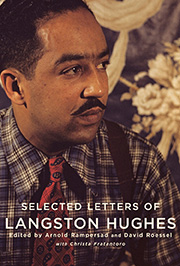 This is the first comprehensive selection from the correspondence of the iconic and beloved Langston Hughes. It offers a life in letters that showcases his many struggles as well as his memorable achievements. Arranged by decade and linked by expert commentary, the volume guides us through Hughes’s journey in all its aspects: personal, political, practical, and—above all—literary. His letters range from those written to family members, notably his father (who opposed Langston’s literary ambitions), and to friends, fellow artists, critics, and readers who sought him out by mail. These figures include personalities such as Carl Van Vechten, Blanche Knopf, Zora Neale Hurston, Arna Bontemps, Vachel Lindsay, Ezra Pound, Richard Wright, Kurt Weill, Carl Sandburg, Gwendolyn Brooks, James Baldwin, Martin Luther King, Jr., Alice Walker, Amiri Baraka, and Muhammad Ali. The letters tell the story of a determined poet precociously finding his mature voice; struggling to realize his literary goals in an environment generally hostile to blacks; reaching out bravely to the young and challenging them to aspire beyond the bonds of segregation; using his artistic prestige to serve the disenfranchised and the cause of social justice; irrepressibly laughing at the world despite its quirks and humiliations. Venturing bravely on what he called the “big sea” of life, Hughes made his way forward always aware that his only hope of self-fulfillment and a sense of personal integrity lay in diligently pursuing his literary vocation. Hughes’s voice in these pages, enhanced by photographs and quotations from his poetry, allows us to know him intimately and gives us an unusually rich picture of this generous, visionary, gratifyingly good man who was also a genius of modern American letters. 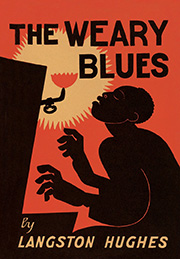 Nearly ninety years after its first publication, this celebratory edition ofThe Weary Blues reminds us of the stunning achievement of Langston Hughes, who was just twenty-four at its first appearance. Beginning with the opening “Proem” (prologue poem)—“I am a Negro: / Black as the night is black, / Black like the depths of my Africa”—Hughes spoke directly, intimately, and powerfully of the experiences of African Americans at a time when their voices were newly being heard in our literature. As the legendary Carl Van Vechten wrote in a brief introduction to the original 1926 edition, “His cabaret songs throb with the true jazz rhythm; his sea-pieces ache with a calm, melancholy lyricism; he cries bitterly from the heart of his race . . . Always, however, his stanzas are subjective, personal,” and, he concludes, they are the expression of “an essentially sensitive and subtly illusive nature.” That illusive nature darts among these early lines and begins to reveal itself, with precocious confidence and clarity.

In a new introduction to the work, the poet and editor Kevin Young suggests that Hughes from this very first moment is “celebrating, critiquing, and completing the American dream,” and that he manages to take Walt Whitman’s American “I” and write himself into it. We find here not only such classics as “The Negro Speaks of Rivers” and the great twentieth-century anthem that begins “I, too, sing America,” but also the poet’s shorter lyrics and fancies, which dream just as deeply. “Bring me all of your / Heart melodies,” the young Hughes offers, “That I may wrap them / In a blue cloud-cloth / Away from the too-rough fingers / Of the world.”