Searching for Home in Sue Miller’s The Arsonist 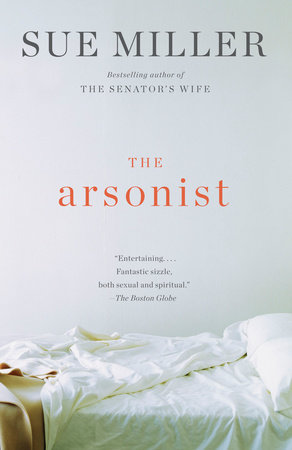 Sue Miller’s The Arsonist begins with a homecoming. After fifteen years of working in East Africa, Frankie Rowley returns to the New Hampshire village where her family has always spent their summers. The tranquility she’s expecting is soon disrupted when, on the very night she arrives, a mysterious arsonist starts targeting the houses of other summer residents. But that’s not the only source of Frankie’s disquiet. Nagging at her is the question of whether she can truly reclaim her parents’ home as her own. And this concept of home—as a physical place and as an anchor for the self—turns into a leitmotif that we see mirrored throughout the book. Here, Sue Miller reflects on why this theme is central to The Arsonist and reveals its fascinating origin—her relationship with her own son.

The notion of home was uppermost in my mind as I began to think about writing The Arsonist, in some measure because my son, my only child, had, at that point, been living in Africa for about twelve years. Occasionally during those years, I’d ask, on a visit to him in Kenya or Uganda, or Zanzibar, when he thought he might come home. Sometimes in amusement, sometimes with irritation, he’d answer, “But I have a home, Mom. And it’s in Africa.”

Point taken. But still, I worried about it, his situation. It made me think of cousins of mine who grew up in India, the children of missionaries. How for them the question of where home was seemed central to all decisions—to the question, even, of who they were, a question each answered very differently.

And this is how it is, really, for all the characters in The Arsonist—home, as the central question, the shaping issue. Mostly for Frankie, whose work held her fast to Africa, a place, she slowly realized, she could never truly claim as home—but which did give her a sense of self, of worth she misses intensely now that she’s left. But for Bud, too, who’s relinquished a life very much in the world to buy a small-town paper, to live in a tiny, gossipy community and to try to make a home there. For Sylvia, who comes to claim a family home in the same small town, and realizes that she can’t be happy there. For Alfie, whose disease makes him yearn for a different kind of “home,” a feeling within himself he can’t quite get to anymore. Even for the summer people, who claim the town as a kind of home, but who live their lives, sometimes unconsciously, in a different stratum from the year-rounders.  In a sense, the book was a way to hold up to the light, almost prismatically, one character’s situation after another’s, to turn it this way and that, to speculate on the varieties of ways this issue touched and changed each one.