Media Center: ‘All Things Cease to Appear’ by Elizabeth Brundage WHAT: ALL THINGS CEASE TO APPEAR,
a novel

WHERE: The story is set in upstate New York.

WHY: “A soaring mix of mysticism,
mayhem, and madness.
“Readers know at the outset of Brundage’s cunning psychological thriller that Catherine Clare has been savagely murdered and suspect, if they don’t know for certain, that the crime was committed by her husband, George. What follows is a crafty dissection of the dissolution of a marriage that was doomed from the start.
“Ill-suited opposites, Catherine and George only marry when Catherine becomes pregnant. An art historian who never completed his doctoral dissertation and never owned up to this lapse, George lands a plum position at a tony private college in the Hudson River Valley. Small-town reticence coupled with rural isolation provide further challenges to their shaky union, and a series of inexplicable and unsolved crimes only add to the uneasiness of Catherine’s life in their impoverished farmhouse, where the previous owners committed suicide.
“As she builds the case against the sociopathic husband, Brundage also constructs a dynamic portrait of a young woman coming into her own at the fringe of the 1970s feminist movement and implicates a destructively self-protective community that fails to seek justice.” —Carol Haggas, in a starred review for BOOKLIST

“With a storyline that tightens like a constrictor, this is a book
that you won’t want to read alone at night.” —KIRKUS, starred review 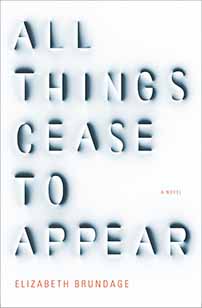