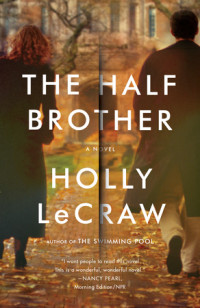 Many of our favorite books, from The Great Gatsby to The Secret History, are told by an observer instead of the hero of the novel. A reading group could spend hours discussing who the true protagonist of such a book is—and we hope that you do!—but, in the end, whether you believe The Great Gatsby is really about Gatsby or Nick, one thing we can all agree on is the richness of the hero/observer dynamic. In The Half Brother by Holly LeCraw, we’re challenged to untangle the complicated web of another such story. Keep reading for LeCraw’s thoughts on this fascinating tension in her latest novel.

Once, in my junior-year high school English class, I decided to write a paper about Horatio. Horatio, in case you don’t remember him—which you probably don’t—is Hamlet’s right-hand man. Mostly, he serves as witness and foil. Wikipedia (unavailable in those days) notes that “when other characters address him, they are almost always telling him to leave.”

Although my teacher suggested there wasn’t much to go on, I was determined to give poor, underappreciated Horatio some love: he was Hamlet’s BFF! Surely he, too, had a story that needed to be told! But, in truth, Shakespeare gave him very few lines, secondary sources were scarce, and I ended up with a B+—mortifying for a nerd like me.

I still refuse to call Horatio inconsequential. After all, in the final scene, as Hamlet is dy-ing, he implores Horatio not to kill himself too, but to stay alive and tell Hamlet’s story. Horatio’s plight is to be left alone, burdened with the history of someone far more charismatic: he is, in other words, a writer.

Years later, while working on my newest novel, The Half Brother, I wrote in a personal Easter egg: Charlie Garrett, an English teacher at a Massachusetts boarding school, is teaching a class called “The Observer and the Hero.” The syllabus includes books such as The Great Gatsby and All the King’s Men, novels with triangles comprised of one dazzling personality, one observer-narrator, and the woman they both love. Like Horatio, the quintessential observer, their narrators are abandoned in the end, their larger-than-life heroes felled. If, in a head-spinning meta-move, Charlie Garrett could read The Half Brother, he’d teach it too.

In fact, Charlie would be the first to call himself a Horatio. His hero, the light to (as he sees it) his dark, is his half brother, Nicky. Thirteen years younger, Nicky has charmed Charlie from the moment of his birth and seems to be sunny, uncomplicated, effortlessly brilliant, and beloved by both men and women—including Charlie’s own first love, May. When Nicky invades Charlie’s world by arriving to teach, alongside Charlie, at the Abbott School, Charlie imagines him roaming the little town’s quaint streets, “scatter[ing] his light as he walks.”

Early in the process, I attempted to write in Nick’s voice. But I found I could only follow him from an observer’s distance—and finally realized that, in fact, the book belonged to Charlie. Heroes, after all, are only meant to be observed; we create them for that very purpose: we need grand outlines to fill with our own desires and hopes. Charlie notes, for instance, that Nicky’s adoring students have practically invented him: “Instead of seeing my brother they saw what they wanted to see, they saw their own dreams.” But Charlie, too, is blinded by his baffling mix of jealousy and love. He feels like only a half, incomplete, until, almost too late, he recognizes that Nicky, too, is a half brother.

So is Charlie the observer, or the hero? Therein lies the tension of the story. When I was a beginning writer, what intrigued me about those books on Charlie’s syllabus, and others—Brideshead Revisited, The Good Soldier, The Secret History—was the stylistic trick of the less-flashy character determining the book’s arc. Such a feat proves the essential democracy, the humanity, of fiction: we are all novels, all protagonists in our own stories; a sidekick from another angle is a hero; and, without storytellers, we wouldn’t remember even the most colorful among us.

“Please do not forget,” Charlie tells his beloved students. “Poets do not just see. They notice. They look.” As our narrator, Charlie is both writer and reader. He is responsible for the story, and then, after it’s over—like a reader reluctantly closing her book—he must continue to live. In this way I hope he embodies both the elegant artifice of story, with its beginning, middle, and end—and the profound continuity of human spirit at the heart of the books that he, and I, both love.