Classic Literature Reimagined: Retellings That Are Perfect for Your Book Club 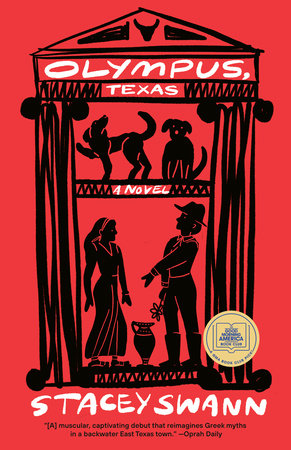 There’s something so compelling about the idea of an author taking a classic novel or play and reimagining it in a modern—or simply altered—context. In the right hands, stories like Hamlet, Pride and Prejudice, and A Midsummer Night’s Dream come alive again, offering book clubs the chance to simultaneously experience a new story while revisiting a beloved classic. We’ve compiled a list of  retellings that will delight you and your book club.

Olympus, Texas by Stacey Swann
(the myths of Hera, Zeus, Ares, Artemis, Aphrodite, among others)

“The antics of the gods on Mount Olympus would rival the plot of the most salacious soap opera. Swann moves the action to East Texas and the back-stabbing members of the Briscoe family, combining ‘Dallas’-style narrative juice with literary panache and a classical pedigree.” —Los Angeles Times

The Briscoe family is once again the talk of their small town when March returns to East Texas two years after he was caught having an affair with his brother’s wife. His mother, June, hardly welcomes him back with open arms. Her husband’s own past affairs have made her tired of being the long-suffering spouse. Is it, perhaps, time for a change? Within days of March’s arrival, someone is dead, marriages are upended, and even the strongest of alliances are shattered. In the end, the ties that hold them together might be exactly what drag them all down.

An expansive tour de force, Olympus, Texas cleverly weaves elements of classical mythology into a thoroughly modern family saga, rich in drama and psychological complexity. After all, at some point, don’t we all wonder: What good is this destructive force we call love?

Greek Myths by Charlotte Higgins
(the myths of Athena, Helen, Circe, and Penelope, among others)

Mythology gets a new twist in this feminist take on some of the most popular stories to be passed down through generations. Told as if they were actual scenes being woven into textiles by the women who are living them, Charlotte Higgins’s retellings breathe new life and perspective into timeless tales. Accompanied by stunning drawings by Chris Ofili, this is a must-read for any fan of Grecian stories.

The Porpoise by Mark Haddon
(Pericles by William Shakespeare)

“Electrifying. . . . As thrilling as it is thoughtful.” —The Washington Post

In a bravura feat of storytelling, Mark Haddon calls upon narratives ancient and modern to tell the story of Angelica, a young woman trapped in an abusive relationship with her father. When a young man named Darius discovers their secret, he is forced to escape on a boat bound for the Mediterranean. To his surprise he finds himself travelling backwards over two thousand years to a world of pirates and shipwrecks, of plagues and miracles and angry gods. As profound as it is entertaining, The Porpoise is a stirring and endlessly inventive novel from one of our finest storytellers.

Sex and Vanity by Kevin Kwan
(A Room with a View by E. M. Forster)

On her very first morning on the island of Capri, Lucie Churchill sets eyes on George Zao and instantly can’t stand him. She can’t stand it when he gallantly offers to trade hotel rooms with her so that she can have a view of the Tyrrhenian Sea; she can’t stand that he knows more about Casa Malaparte than she does; and she really can’t stand it when he kisses her in the darkness of the ancient ruins of a Roman villa and they are caught by her snobbish, disapproving cousin Charlotte.From the bestselling author of Crazy Rich Asians comes a truly modern love story set between summer playgrounds of privilege and peppered with decadent food and extravagant fashion. Sex and Vanity is a daring homage to A Room with a View and a brilliantly funny comedy of manners straddling two cultures.

“Big, beautiful and most of all bold. . . . A dazzlingly original reading of [King Lear] and a full novel in its own right. A masterpiece.” —The Spectator

When a billionaire hotelier and political operator attempts to pit his three daughters against one another, a brutal struggle for primacy begins in this modern-day take on Shakespeare’s King Lear. Set in contemporary India, where rich men are gods while farmers starve and water is fast running out, We That Are Young is a story about power, status, and the love of a megalomaniac father. A searing exploration of human fallibility, Preti Taneja’s remarkable novel reveals the fragility of the human heart—and its inevitable breaking point.

“Nutshell is a joy: unexpected, self-aware, and pleasantly dense with plays on Shakespeare.” —NPR

Trudy has been unfaithful to her husband, John. What’s more, she has kicked him out of their marital home, a valuable old London town house, and in his place is his own brother, the profoundly banal Claude. The illicit couple have hatched a scheme to rid themselves of her inconvenient husband forever. But there is a witness to their plot: the inquisitive, nine-month-old resident of Trudy’s womb.As Trudy’s unborn son listens, bound within her body, to his mother and his uncle’s murderous plans, he gives us a truly new perspective on our world, seen from the confines of his. McEwan’s brilliant recasting of Shakespeare lends new weight to the age-old question of Hamlet’s hesitation, and is a tour de force of storytelling.

The summer after university, Emma Woodhouse returns home to live with her widowed father and to launch her interior design business. Apart from cultivating grand career plans and managing her father’s hypochondria, Emma busies herself with the two things she does best: matchmaking and offering advice on everything from texting etiquette to first date destinations. Happily, summer presents abundant opportunities for both, as old and new friends are drawn into the sphere of Emma’s counsel. Carriages have been replaced by Mini Coopers and cups of tea by cappuccinos, but Alexander McCall Smith’s sparkling satire and cozy sensibility are the perfect match for Jane Austen’s beloved tale.

A successful Iowa farmer decides to divide his farm among his three daughters. When the youngest objects, she is cut out of his will, setting off a chain of events that brings dark truths to light and explodes long-suppressed emotions. An ambitious reimagining of Shakespeare’s King Lear cast upon a typical American community in the late twentieth century, this Pulitzer Prize–winning novel takes on themes of truth, justice, love, and pride, and reveals the beautiful yet treacherous topography of humanity.

Longbourn by Jo Baker
(Pride and Prejudice by Jane Austen)

“Original and charming, even gripping, in its own right.” —The New York Times Book Review

The servants take center stage in this irresistibly imagined belowstairs answer to Pride and Prejudice. While Elizabeth Bennet and her sisters fuss over balls and husbands, Sarah, their orphaned housemaid, is beginning to chafe against the boundaries of her class. When a new footman arrives at Longbourn under mysterious circumstances, the carefully choreographed world she has known all her life threatens to be completely, perhaps irrevocably, upended. Jo Baker dares to take us beyond the drawing rooms of Regency England and, in doing so, uncovers the real world of the novel that has captivated readers’ hearts around the world for generations.

The Cake House by Latifah Salom
(Hamlet by William Shakespeare)

Rosaura Douglas’s father shot himself after her mother left him…or at least that’s the story everyone is telling. Now her mother has remarried and Rosie is trapped in the “Cake House,” a garish pink edifice in the hills of Los Angeles. It’s also the house where her father died—a fact that everyone else who lives there wants to forget. Soon, however, her father’s ghost appears with warnings that her new stepfather, Claude, is not to be trusted. And as the ghost becomes increasingly violent—and the secrets of her family’s past come to light—Rosie must finally face the truth behind the losses and lies that have torn her life apart.

Read an excerpt | Buy the Book

When Theo, a workaholic lawyer, his English wife, Polly, and their two children rent an idyllic Italian villa, they expect a relaxing summer holiday together. Polly has invited an eccentric mix of friends and family along—including three eligible bachelors, a former model, an Indian-British divorcée with a young son, and her own appalling mother-in-law. They soon discover the Casa Luna is a strange, enchanted place where people find their heart’s desire—but at a price. Everyone falls in love, though not with the people they expect, and the results are surprising and hilarious.

Read an excerpt | Buy the Book