Media Center: ‘Anatomy of a Soldier’ by Harry Parker

WHAT: ANATOMY OF A SOLDIER, a novel

WHY: “This debut novel by a British combat veteran chronicles a soldier’s maiming and recovery with an inventiveness that in no way mitigates war’s searing heartbreak — or the spirit’s indomitability.
“In the tradition of Dalton Trumbo’s 1939 classic, Johnny Got His Gun, which takes place in the shattered consciousness of a horrifically wounded World War I doughboy, Parker’s novel makes vivid the drudgery, dread, and appalling spoils of war. Weaving back and forth through time, the narrative focuses on events leading up to and following a land-mine explosion in an unnamed Mideast war zone where a British soldier, introduced as BA5799 but later revealed to be Capt. Tom Barnes, is deployed. The story not only takes in Barnes, but also some of the people for whom the war zone is home, including those responsible for assembling the IED whose detonation causes Capt. Barnes to lose both his legs.
“What’s different about Parker’s approach to this story is the way he gives the points of view in each chapter to an inanimate object, whether it’s a bag of fertilizer used to make the device or the device itself; whether it’s the fungus infecting one of Barnes’ shattered legs or the saw used to cut off that leg. Everything from the paper used to print a photo to shaving cream to a backpack to a catheter to an army boot bears witness to the jumbled sequence of events behind Barnes’ injury and his rehabilitation.
“It’s a risky way of telling such a harsh story, to say the least. Yet rather than alienating readers from this drama, Parker’s storytelling device of using objects as his narrators intensifies the reader’s focus on the human emotions—and to Parker’s credit, it isn’t just Barnes, his family and friends, doctors, nurses, and fellow soldiers who are given dimension, but also the Muslims dedicated to killing as many of the ‘infidel’ invaders as they can.
“You couldn’t call this novel an anti-war tract; it’s too grounded in matters of patriotism and duty for that. But you could certainly label it a pro-understanding work of art—and those may be more in need right now than ever before.” —KIRKUS REVIEWS

“An arresting and unconventional first novel…disorienting but deeply compelling.”
—Thomas Maughan, in a starred review for BOOKLIST 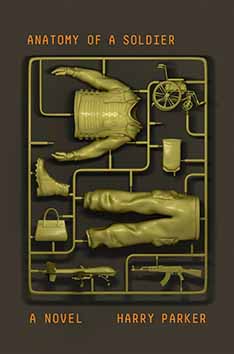