The Origins of Isabel Dalhousie: How Alexander McCall Smith Brought A Character to Life 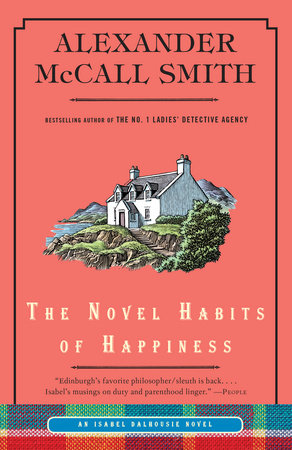 For the legions of Alexander McCall Smith fans out there, we have some exciting news! Today, the latest installment in the beloved Isabel Dalhousie series goes on sale in paperback. The Novel Habits of Happiness is the tenth book in the series, and our heroine is just as inquisitive as ever. With this important milestone, we asked Alexander McCall Smith to reveal how this curious sleuth came to be. Keep reading to find out more about Isabel and her familial ties to a real-life figure in Alexander’s life.

Literary characters are like old friends: sometimes you forget when exactly you met them or the circumstances of your meeting. I remember, though, my first encounter with Isabel Dalhousie, the heroine of my series of novels of the same name. I had wanted for some time to write more about my home city of Edinburgh, and indeed about Scotland, the country of which it is the capital. I had also wanted to write about a philosopher who thought rather too much about what to do. As a result of this, Isabel came to my mind. Suddenly she was there, addressing me, making her views known on a wide range of subjects.

Of course she had to have a back story. Few literary characters seem real without a hinterland of some sort—a place they come from, the family they were born into, the school they attended, and so on. I decided that Isabel would be half Scottish and half American. I had not anticipated this, but it suddenly seemed exactly right. I suppose that the reason why I wanted to give her this background was that I wanted her to be the cousin of a friend I had first met when I spent six months as a visiting professor in Dallas, Texas. This friend, Mimi McKnight, was the wife of a colleague, and they often entertained me at dinner at their house. Mimi was the ideal cousin for my fictional character to have, and happily she readily agreed. In this way Isabel acquired the American side of her family, including her mother—whom she always refers to as my sainted American mother.

So Isabel was born. After that, any spaces in her life were filled out. She acquired a house, a lover (who became her husband), and a contrary niece. She acquired habits—and a fox to live in her garden. She became a person.