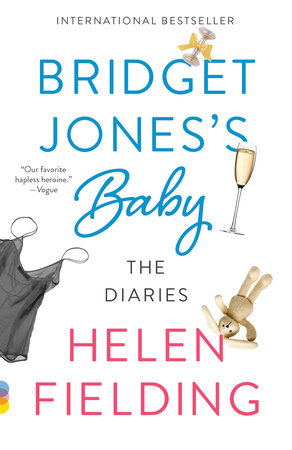 8 p.m. Friday night, Brooklyn, NY: Am finishing the last chapter of Bridget Jones’s Baby by Helen Fielding on my couch in my comfies. Have had a few more drinkies than I probably should have (calories, sulfates, etc.) and am about to queue up the movie version of the book on Netflix. Just heard the ding of the oven, meaning my cheesy potatoes are done. Credits roll. Was feeling sad about ending the book but now decidedly less sad with Colin Firth on the screen. . . .

If this sounds like the Bridget Jones version of your real-life diary entry, then we have some things to discuss with you. Mainly, the differences between the book and the movie. Because there are a lot, and some of them are huge and some of them are tiny. But what it means for big Bridget fans, like us here at the Reading Group Center, is that each is interesting in its own way. What’s true in both the film and the novel is that Bridget Jones is pregnant, and she’s not sure who the father is. She’s still single, clumsy, and lovable. She’s still got her job at the TV show, Shazzer and Tom are still around, and her mum’s still going on and on about babies and men.

And now, for the differences:

In the book version, Daniel Cleaver is alive and well. So alive and well that he’s a contender for baby daddy, cracking his normal jokes and pulling his normal stunts. In the movie, Daniel Cleaver has died before the film begins, which means there’s a different man in the running for Papa Jones, namely Jack, an American man played by Patrick Dempsey. Both Jack and Daniel are competing with Mark Darcy to be crowned father. Some things (like Mark Darcy) never change.

In the movie, Bridget gets dragged to a Coachella-like music festival, where she falls into bed (or more accurately . . . into a glamping yurt cot) with an American man named Jack. In the book, no music fests are to be found. What is to be found, however, is a fancy dinner with Daniel Cleaver.

Daniel is dead. No, he’s writing a novel!

Playboy Daniel has decided to get serious in the novel version of Bridget Jones’s Baby. He’s writing an extremely boring book—The Poetics of Time—and he goes on and on about its contents over dinner with Bridget. We love reading but would never want to be subjected to his particular brand of literary fiction.

Jack’s the best man! Because Bridget and Mark are married! No, they’re not! Not yet!

In pure movie magic, American dreamboat Jack is the best man at Bridget and Mark’s wedding. In the book, you have to use your imagination because the most we get is a proposal from Mark in the hospital room as they find out that Mark is the father.

10 p.m. Friday night, Brooklyn, NY: Am extremely tuckered out after a night of good book and movie. Should move from couch to bed but can’t. Muster. Energy. Must recycle wine bottle. Must try not to dream only of Daniel, Mark, and Jack for the rest of the week. . . .