Will Schwalbe’s Books for Living 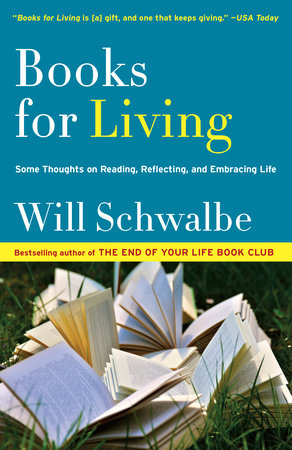 Most dedicated bookworms have a handful of titles that came to them at just the right time in their lives. Author Will Schwalbe, a certified book lover himself, has twenty-six of them on his list. In Books for Living, he highlights the titles that have helped him make sense of the world and find answers to life’s questions big and small. This book about books is a tribute to the indelible impact that reading can have on our lives, and we’re just wild about it.

Below, we feature just a few of our favorites that will give you a sense of the breadth of Schwalbe’s selections.

“The most perfect of all the Dickens novels.” —Virginia Woolf

David Copperfield is the classic account of a boy growing up in a world that is by turns magical, frightening, and grimly realistic. In a book that is part fairy tale and part thinly veiled autobiography, Dickens transmutes his experiences into a brilliant series of comic and sentimental adventures in the spirit of the great eighteenth-century novelists he so admired. Few readers can fail to be touched by David’s fate, and fewer still to be delighted by his story. The cruel Murdstone, the feckless Micawber, the unctuous and sinister Uriah Heep, and David Copperfield himself—into whose portrait Dickens poured so much of his own early life—form an enduring part of our literary legacy.

An intimate look at writing, running, and the incredible way they intersect, from the incomparable, bestselling author Haruki Murakami. While simply training for New York City Marathon would be enough for most people, Haruki Murakami’s decided to write about it as well. The result is a beautiful memoir about his intertwined obsessions, full of vivid memories and insights, including the eureka moment when he decided to become a writer. By turns funny and sobering, playful and philosophical, What I Talk About When I Talk About Running is rich and revelatory, both for fans of this masterful yet guardedly private writer and for the exploding population of athletes who find similar satisfaction in athletic pursuit.

“If Van Gogh was our nineteenth-century artist-saint, James Baldwin is our twentieth-century one.” —Michael Ondaatje

Set in the 1950s Paris of American expatriates, liaisons, and violence, a young man finds himself caught between desire and conventional morality. With a sharp, probing imagination, James Baldwin’s now-classic narrative delves into the mystery of loving and creates a moving, highly controversial story of death and passion that reveals the unspoken complexities of the human heart.

Song of Solomon by Toni Morrison

“A rich, full novel. . . . It lifts us up [and] impresses itself upon us like a love affair.” —The New York Times Book Review

Milkman Dead was born shortly after a neighborhood eccentric hurled himself off a rooftop in a vain attempt at flight. For the rest of his life he, too, will be trying to fly. With this brilliantly imagined novel, Toni Morrison transfigures the coming-of-age story as audaciously as Saul Bellow or Gabriel García Márquez. As she follows Milkman from his rustbelt city to the place of his family’s origins, Morrison introduces an entire cast of strivers and seeresses, liars and assassins, the inhabitants of a fully realized black world.

A classic work on Eastern philosophy, Zen in the Art of Archery is a charming and deeply illuminating story of one man’s experience with Zen. As a German professor of philosophy in Tokyo, Eugen Herrigel took up the study of archery as a step toward an understanding of Zen Buddhism. This book is the account of the six years he spent as a student of one of Japan’s great kyudo (archery) masters, and of how he gradually overcame his initial inhibitions and began to feel his way toward new truths and ways of seeing.

A Little Life by Hanya Yanagihara

“Deeply moving. . . . A wrenching portrait of the enduring grace of friendship.” —NPR

Bird by Bird by Anne Lamott

“A warm, generous and hilarious guide through the writer’s world and its treacherous swamps.” —Los Angeles Times

Advice on writing and on life from an acclaimed bestselling author:
“Thirty years ago my older brother, who was ten years old at the time, was trying to get a report on birds written that he’d had three months to write. It was due the next day. We were out at our family cabin in Bolinas, and he was at the kitchen table close to tears, surrounded by binder paper and pencils and unopened books on birds, immobilized by the hugeness of the task ahead. Then my father sat down beside him, put his arm around my brother’s shoulder, and said, ‘Bird by bird, buddy. Just take it bird by bird.’”