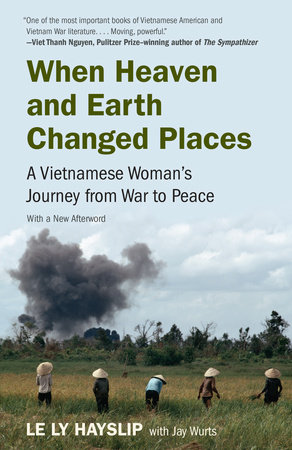 The Vietnam War looms large in the memory of many Americans, so in contemplating this historic conflict we often focus on its impact on the United States and its citizens instead of the people of Vietnam. In his latest documentary, Ken Burns seeks to address some of this imbalance. The Vietnam War: An Intimate History, which premieres on PBS on September 17th, will be a particularly intriguing because it takes a wide angle approach to the war; Burns chronicles the personal stories of both Americans and the Vietnamese, not just the military and political events.

Noted historian Geoffrey C. Ward worked with Ken Burns to create an unmissable companion volume to The Vietnam War, but if you’re interested in more of the personal side of the war, we suggest you read Le Ly Haslip’s When Heaven and Earth Changed Places. Want to discuss this moving memoir with your book club? We’ve pulled together a reader’s guide to aid your discussion below.

It is said that in war heaven and earth change places not once, but many times. When Heaven and Earth Changed Places is the haunting memoir of a girl on the verge of womanhood in a world turned upside down. The youngest of six children in a close-knit Buddhist family, Le Ly Hayslip was twelve years old when U.S. helicopters landed in Ky La, her tiny village in central Vietnam. As the government and Viet Cong troops fought in and around Ky La, both sides recruited children as spies and saboteurs. Le Ly was one of those children.

Before the age of sixteen, Le Ly had suffered near-starvation, imprisonment, torture, rape, and the deaths of beloved family members—but miraculously held fast to her faith in humanity. And almost twenty years after her escape to America, she was drawn inexorably back to the devastated country and family she left behind. Scenes of this joyous reunion are interwoven with the brutal war years, offering a poignant picture of Vietnam, then and now, and of a courageous woman who experienced the true horror of the Vietnam War—and survived to tell her unforgettable story.

First published in 1989, When Heaven and Earth Changed Places was hailed as an instant classic. Now, some two decades later, this indispensable memoir continues to be one of our most important accounts of a conflict we must never forget.

1. Why do you think Le Ly Haslip wrote this book? Do you think her intention was to share her experience with others or was she looking to exorcise her own demons?

2. Did this book challenge anything you previously believed about the Vietnam War?

3. About halfway through her memoir, Hayslip expresses anger over Chin forcing Ba to marry him. Haslip’s father then says, “Don’t hate Chin—and don’t hate Ba for marrying him. Hate the war for doing what it did to them both.” How can this sentiment of hating the war, not the people it affected be applied to other people in the memoir?

4. Throughout her memoir, Hayslip’s understanding of who “the enemy” is changes. Examine who she believes the enemy is at different points in the book and why her view changes.

5. Do you think Hayslip was right to marry Ed and leave the country?

Phung Le Ly Hayslip was born in Vietnam in 1950. She is the author of two memoirs—When Heaven and Earth Changed Places and Child of War, Woman of Peace—which were adapted into the film Heaven and Earth by Oliver Stone. Since 1986, she has helped rebuild her homeland through the two charitable organizations she established. Her efforts now focus exclusively on supporting the orphanages she founded in Vietnam.