Writing Down: Linda Spalding Takes on History and Race in A Reckoning 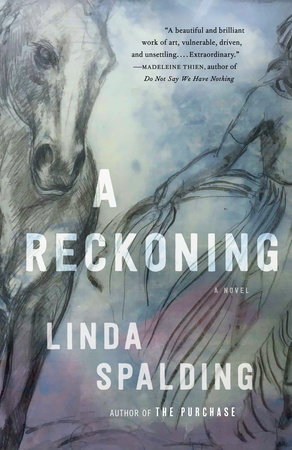 There are very few issues as difficult to broach in literature as the history of slavery, but there are also very few as important to be examined, discussed, and explored in a meaningful way. In A Reckoning, Linda Spalding tackles this tricky topic with poise, pathos, and poignancy, as she tells the story of one Virginia family coming to terms with their slave-owning past. Here, Spalding gives us a glimpse behind the scenes of what inspired her to write about such a difficult theme—we hope your group will find her insights and her novel as interesting and thought-provoking as we do.

Writing a novel of the past is like burrowing. Down and down. Who was this person who lived and breathed in 1856? How did she dress? How did he feel about his youngest son? Where did she go to be alone? How often did they pray? Why did they beat the boy? And why oh why did he have a pet bear?

I’ve been wondering about forgotten things forever. Growing up in Kansas, there were long car rides during which, from the back seat, I erased everything modern from the landscape. No telephone poles. No fences or streets. I had a fuzzy idea about the native people who had lived there before my ancestors arrived. And I read books about the past. History.

I had dolls to dress and teach. Each of them had a history, a personality. They were envious, sullen, or cajoling, but they enacted my stories. I learned about character and plot through play. And more reading.

Then I began to write. I asked so many questions that my father often told me to hush. I think it began when I learned that his great-grandfather had kept slaves in Virginia. I learned that we had come out to Kansas just prior to the Civil War, traveling in a covered wagon with a pet bear! Later, I went to Jonesville, in the southwest corner of Virginia, where I met an elderly woman who came to the library on Saturdays to answer questions about the old days. Why did people plant potatoes in hills, for example? She was surprised that I didn’t know about the red-brick family manse that still stands in its slave-built glory just outside of town. Its owners invited me to descend the old creaky stairs to a terrible, dark cellar where my great-great grandfather’s brother had once housed his slaves.

Was this my story to tell? Some would say no, but I see writing as a bridge, as a way to empathy, which is as close as we humans get to grace, so I studied this horror in order to learn its mores, its explanations and excuses. The biblical story of Jacob’s Ladder has always intrigued me. Who was that angel and why did Jacob cling to it so fervently? I read about a Canadian abolitionist who fooled plantation owners into thinking he wanted to study the birds in their fields. I read slave narratives and farmer’s journals. Travelers’ accounts of the Wilderness Road up through Kentucky and of steamboat journeys on the Missouri River. I put myself into the hearts and heads of my characters, even the ones who were thoughtless and cruel. We flourish or fade depending on our choices, our acts. A boy’s pet bear may lead him to a violent, unruly manhood or help him grow into a gentler awareness. He may follow the ways of his parents or rebel. And that, for me, is the real point of this story, which required the tender understanding of a journey made by my family in 1856.