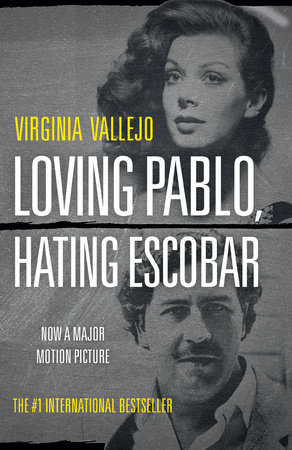 In the 1980s Colombia’s most famous television celebrity fell in love with its most famous and terrifying criminal. In Loving Pablo, Hating Escobar Virginia Vallejo recounts the fascinating story of her affair with Pablo Escobar. When she interviewed him on her top-rated news program, she met a man who did wonderful things for his community, including building housing for the homeless, but as their relationship progressed she became all too familiar with his dark side—the side that drove him to become the head of a multinational cocaine industry and be responsible for the deaths of thousands of people. Vallejo’s writing brings us deep into their stormy relationship and paints an intimate portrait of a man who would become notorious.

Your reading group can continue to explore this fascinating story with Loving Pablo, a major motion picture based on Vallejo’s book and starring Penélope Cruz and Javier Bardem. Watch a trailer below to see Vallejo’s words brought to life. And if you want to learn even more about Pablo Escobar and the cartel world, check out these other recommendations.

Pablo Escobar: El Patrón del Mal
A seventy-four-episode series that originally aired in Colombia in 2012. The show details Escobar’s life from his childhood and petty thievery to his reign over the international drug market to his eventual death at the hands of a Colombian task force.

The Two Escobars
At this point, I don’t need to tell you who Pablo Escobar is, but you might not have heard of Andrés Escobar. He was Colombia’s leading soccer star going into the 1994 World Cup when the national team, fueled by drug money from Escobar and riding the wave of “narco-soccer,” had become the favorite. This documentary explores how politics, sports, and crime weave together in a country where soccer is much more than a game, and where a single mistake, whether on the field or in the high-stakes drug world, can have fatal consequences.

Cocaine Godmother
Griselda Blanco could be considered the female Pablo Escobar. Throughout the 1970s and ’80s she ran a huge drug empire in Miami importing cocaine from Colombia. She masterminded new ways of smuggling—hiding the drugs in lingerie, and of murdering her enemies—she’s credited with inventing the drive-by motorcycle shooting. Cocaine Godmother, starring Catherine Zeta-Jones, chronicles her life story.

Drug Lords
A new series covering various infamous drug kingpins throughout history and the people whose job it is to overthrow them. Pablo Escobar is the subject of the first episode, followed by the Cali Cartel. Then, the show moves on to equally interesting criminals who you may not know about who ruled the drug world from New York to Australia and beyond.