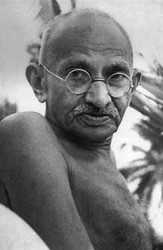 WHY: “A landmark account of Gandhi’s engagement
with the world he would transform forever.
“In the second half of his two-part biography of Gandhi, Ramachandra Guha mines newly discovered archival material to produce a portrait of the Indian leader that is both panoramic in scope and surprisingly intimate, both admiring of Gandhi and cognizant of his flaws.
“On his return from South Africa in 1915, Gandhi was a much-admired but little-known figure outside of his own Gujarati community and India’s urban elite. In the next three decades, he mobilized national support for Indian self-rule, traveling the length and breadth of the subcontinent preaching his philosophy of satyagraha, or nonviolent resistance. Along the way, as Guha details through exhaustively pieced-together correspondence, Gandhi’s beliefs evolved: his intellectual sparring with B.R. Ambedkar, the leader of India’s ‘untouchables,’ led him to soften his more conservative stance on caste, and his relationship with his long-suffering wife, Kasturba, grew to resemble an equal partnership in its later years.
“Guha contextualizes Gandhi’s anticolonialism as merely one strand in a rich skein of political and moral beliefs, arguing that Gandhi’s campaigns for Hindu-Muslim unity, the abolition of untouchability, and the promotion of moral self-discipline (or swaraj) were inseparable from his goal of ending British rule in India.”
–PUBLISHERS WEEKLY, a starred review

“Superb. On nearly every page, Guha offers evidnece why Gandhi remains
relevant in the workd 70 years after his death.” –KIRKUS, a starred review 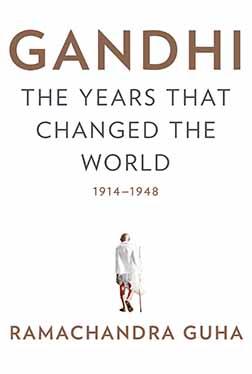 On 18 July 1914, Mohandas Gandhi sailed from Cape Town for London. With him were his wife, Kasturba, and his closest friend, a Jewish architect named Hermann Kallenbach. Gandhi was leaving South Africa for good, after two decades spent there in various roles: lawyer, editor, food faddist, activist and prisoner. He had been the unquestioned leader of the small Indian community in South Africa. Now he wished to work with, and for, the several hundred million people of his homeland.
. . . . .
Knopf. With 16 pages of photos.
1008 pages. $40 ISBN 978-0-385-53231-0 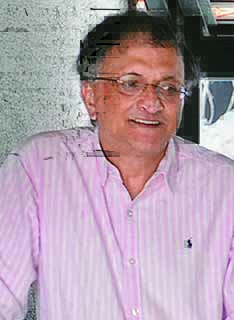