Becoming Transfixed by Washington Black: An Exclusive Essay from the Editor 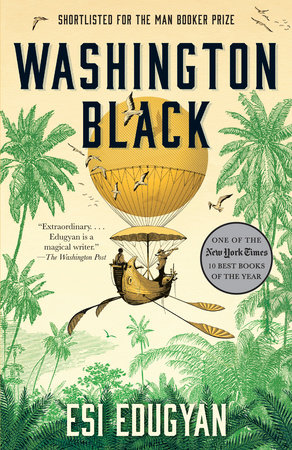 Esi Edugyan’s Washington Black is the latest book we cannot stop discussing. One of the New York Times’s ten best books of the year, finalist for the Man Booker Prize, Los Angeles Times Book Prize, and the Andrew Carnegie Medal for Excellence, and winner of Scotiabank Giller Prize, it’s an understatement to say this book has been highly lauded. We don’t have space to list all the other honors Washington Black has received. If you think this means it will be highfalutin and stuffy, we are here to tell you that you couldn’t be more wrong—it was also one of Entertainment Weekly’s ten best books of the year after all. And you don’t have to take just our word for it—we asked editor Diana Miller to tell us what it was like to first read Washington Black and what made this particular story so special. We hope you enjoy this rare peek behind the scenes!

One of the great privileges of being an editor is having the opportunity to engage with a writer’s work in progress. I was introduced to Washington Black through a partial manuscript and was immediately transfixed, from those earliest pages, by Wash as a character. I couldn’t stop thinking about him. He felt like a real person. This is a particularly stunning effect in historical fiction, in which sometimes even the best-drawn characters can seem distant. But Wash’s voice leaps off the page, which is a tribute to the power and nuance of Esi’s storytelling. As a reader, my heart was breaking for Wash’s hardships and soaring for his triumphs, and as an editor, I was impressed by the deft mastery of voice that made him come to life. Wash’s firsthand account is intimate and vivid, disarmingly direct, yet there is also gorgeous restraint in his narration, even in the story’s most heated moments.

I was also bowled over by the way Washington Black takes on big, important questions about humanity—freedom, betrayal, self-determination, redemption—while simultaneously juggling an intricate plot. It’s a rare accomplishment to create an exciting page-turner, filled with action and drama and incident, that can speak to larger issues, ones that in fact are still keeping us up at night in today’s world.

I’d add that I found the novel a lot of fun. This may seem a strange thing to say about a book that opens with harrowing scenes of slavery. But Wash is an inspirational character who transcends his dire circumstances, and his escape and subsequent adventures are exhilarating: a hot-air balloon flight, a journey on the high seas, a glimpse into the secret passageways of the underground railroad, a trek through the frozen far reaches of the arctic, and much, much more. In the end there is a great deal of hope and light and joy in the book. Which I think we’re all hoping to find in our fiction.

I had the chance as well to speak with Esi before Knopf acquired the book, and was struck by her fierce yet unassuming intelligence, in particular by her description of the novel as a post-slavery narrative, which I thought was a beautifully astute way to look at it. This is a story that goes beyond Wash’s experiences on the plantation or even his escape, that shows his life as a free man, shows him coming into his own. Washington Black is an adventure story, a coming-of-age story, a love story, a Künstlerroman, a novel of art and science—an incredibly rich, varied, exceptional novel, one that generates fascinating discussion. I hope you’ll enjoy.