“How Have I Not Read This?” July Book Club Pick 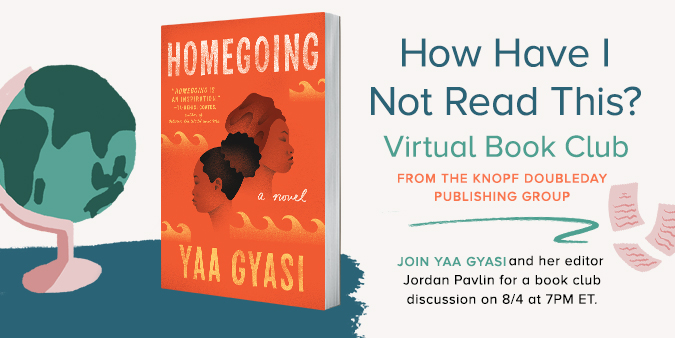 Join Yaa Gyasi and her editor, Knopf Editorial Director Jordan Pavlin, for a live, virtual discussion of Gyasi’s bestselling, award-winning debut novel, Homegoing. Browse full details below, and be sure to read along with us at #HowHaveINotReadThis.

Published in 2016, Yaa Gyasi’s novel Homegoing earned its place as the most notable literary debut of the year, winning the PEN/Hemingway Award and the NBCC’s John Leonard Award, and becoming a finalist for both the Dayton Literary Peace Prize and the PEN/Robert W. Bingham Prize. The novel’s fans include Zadie Smith (“Spectacular”), Ta-Nehisi Coates (“an inspiration”), Trevor Noah (“a beautiful story”), and Roxane Gay (“I could not put this book down”). A major bestseller upon publication, Homegoing is now back on the New York Times bestseller list four years later.

Ghana, eighteenth century: two half sisters are born into different villages, each unaware of the other. One will marry an Englishman and lead a life of comfort in the palatial rooms of the Cape Coast Castle. The other will be captured in a raid on her village, imprisoned in the very same castle, and sold into slavery. Homegoing follows the parallel paths of these sisters and their descendants through eight generations: from the Gold Coast to the plantations of Mississippi, from the American Civil War to Jazz Age Harlem. Yaa Gyasi’s extraordinary novel illuminates slavery’s troubled legacy both for those who were taken and those who stayed—and shows how the memory of captivity has been inscribed on the soul of our nation.

Find out more about the book, read an excerpt, and print a reader’s guide.

YAA GYASI was born in Ghana and raised in Huntsville, Alabama. She holds a BA in English from Stanford University and an MFA from the Iowa Writers’ Workshop, where she held a Dean’s Graduate Research Fellowship. Her debut novel, the bestselling and award-winning Homegoing, was published in 2016. Her next novel, Transcendent Kingdom, will be published by Knopf on September 1. She lives in Brooklyn.