A Q&A with the Author of Everything Inside 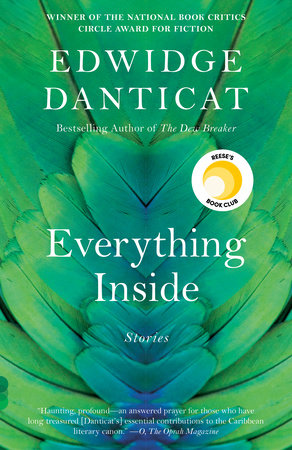 We are delighted Edwidge Danticat’s short story collection Everything Inside is the August pick for Reese’s Book Club!

Spanning Miami to Port-au-Prince to a small unnamed country in the Caribbean and beyond, these eight powerful, emotionally absorbing stories explore the forces that pull us together, or drive us apart, sometimes in the same searing instant. A romance unexpectedly sparks between two wounded friends; a marriage ends for what seem like noble reasons, but with irreparable consequences; a young woman holds on to an impossible dream even as she fights for her survival; two lovers reunite after an unimaginable tragedy, both for their country and in their lives. In Everything Inside, Edwidge Danticat has crafted an indelible work of keen observation and surpassing beauty.

We are thrilled to have the author answer a few questions about her inspiration behind the stories, how to approach the topic of death, which stories are the most meaningful to her, and more. We hope you enjoy!

Reading Group Center: How does Everything Inside reflect your experience as an immigrant?

Edwidge Danticat: Every character in the book is a bit of me. The child who was separated from a parent. The college student who had to combat condescending, and sometimes racist, misconceptions about Haiti, even from very well-meaning people. The first generation writer. There’s a bit of me in all these characters, most of whom happen to be immigrants, or children of immigrants. The immigrant experience is in no way monolithic, even within one group or nationality. It’s very different within generations as well. I wanted to reflect all of that, and a collection of stories is certainly a good way of doing it.

RGC: What drew you to the short story format? What can a short story collection do that perhaps a novel or a memoir cannot?

ED: I love short stories, both reading and writing them. I have often mentioned this anecdote I once heard or read—I no longer remember where—of short stories being like paintings. You know that something happened before and after the image you’re looking at, but while you’re taking the painting in, you wholly fall into it, and find it hard to move on. Novels and memoirs are wonderful—I have written both, but there’s something economical and precise about a short story that’s akin to poetry.

RGC: In Everything Inside, you explore how people come to terms with death, and one character experiences how “…dying offered him a kind of freedom he’d never had before.” What is it about death or accepting death that you see as a type of liberation?

ED: I don’t want to seem as though I’m idealizing death, especially at this moment when so many people are dying from a virus for which there’s no cure. The character who’s thinking this is dying and knows he is dying. The entire story is about his trying to make sense of dying. I wanted, in writing this story, to figure out what that feeling might be like for a person who wants to resist death, but cannot, a person who’s refusing as much as he can, to fade into that good night. I imagine it might involve drawing on personal beliefs about death, and whether you think there is an afterlife or not. My character believes there is. I wrote a book called The Art of Death: Writing the Final Story after my mother died of ovarian cancer five years ago. It was in part about watching her die and also reading about how people have written about death. In her book, The Writing Life, Annie Dillard exhorts us to write as though every story were our last, as though we are dying. That’s what I try to do.

RGC: Is there one story that stands out as particularly meaningful for you or that you think about more often than the rest?

ED: Because it is the most recent of the stories, I’d say the last one in the book, “Without Inspection.” It’s the story that deals most directly with this very painful threshold where immigration meets extreme human vulnerability. It was structurally a challenging story to write, in that everything is supposed to take place in a few seconds. I am also very fond of “Sunrise, Sunset” because it’s a mother/daughter story and I love those types of stories. The truth is, though, all these stories are in some way special to me.

RGC: In your opinion, what is the best way to read Everything Inside? All at once? Savoring slowly over a long period of time? How do you picture your readers experiencing the book in the most powerful way?

ED: I would say read the stories in order. Read one or two then take a break, even if it’s walking around your room for a few minutes. Give the individual stories some time to sink in. If there’s something in a story, a song, a kind of painting that’s mentioned that you’ve never heard of, explore that. That’s how I read short stories myself, like tiny novels.

RGC: What would you like to share with readers who are experiencing grief or loss of their own?

ED: It’s hard to find the right words to say to grieving people. I’ve been on both ends of that. I would say it’s okay to take the time and space you need for your grief. Find people who support you. Take good care of yourself, even as you have to sometimes relearn to do some basic things that you used to do with your loved one, like eat regular meals, or laugh.

RGC: Imagine you’re part of a book club discussing Everything Inside. What is a topic or question that you would like to pose to the group and why?

ED: This book is, at its core, about love. Messy, complicated love. That’s why I chose as one of its epigraphs a line from a poem by Nikki Giovanni, “We love because it is the only true adventure.” The other epigraph is by Cindy Jiménez-Vera and it starts with “Being born is the first exile.” We were all born and we all love, and hopefully are loved, which is something that is often distorted about immigrants. Sometimes our poverty is used as a whip. We’re told we’re born in the wrong places, in shithole countries for example, and that the hard choices we make in leaving our children, or taking them on arduous journeys with us, means that we are not even human to love. So, these are at least two things I would cover if I were discussing the book in a book club, immigration and love. However, each reader reads a different book, based on what that person brings to the book, so I would not limit the discussion to those things. There’s also music and song and history to be explored in the stories. Have fun.