A Q&A with Eley Williams, author of Attrib. and Other Stories 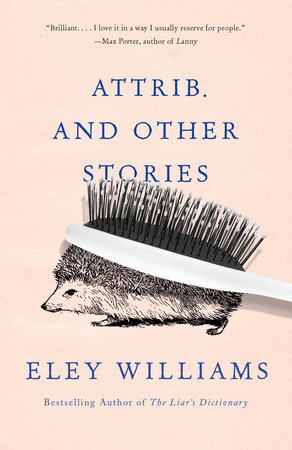 If you enjoyed The Liar’s Dictionary or are in the mood for a quirky short-story collection, you’ll love Eley Williams’s paperback original Attrib. and Other Stories. Originally published and highly acclaimed in the UK, this book presents a cast of unforgettable characters standing at the precipice of emotional events (a disastrous breakup, a successful date, an unexpected arrival) and finding it fiendishly impossible to express themselves. With intimate, irreverent, and playful prose, Williams rejoices in both the possibilities and limitations of language, as well as the very human need to be known and understood—despite our own best efforts.

This dazzling, prizewinning compilation showcases Williams’s bold talent, and we are proud to have her join us in our virtual space. Read this Q&A to discover Williams’s inspiration for her book, insights into her creative process, her favorite story in this collection, and one key question she poses to book clubs.

We hope you love Eley Williams as much as we do!

Reading Group Center: What was your inspiration for writing Attrib. and Other Stories? Are there any characters or aspects of the book that feel especially personal to you?

Eley Williams: I did not plan to write a collection, so the majority of the stories were written as one-off riffs or feints. Once a full book seemed a possibility, it became important to find ways in which I might combine, amplify, append, or shuffle the stories so that they would make sense as a group. I realized themes of communication and miscommunication arose throughout the pieces, as well as tentative or side-lined narrators who did not trust their ability to leave a mark on the world. Often these characters are represented as struggling to find the right words to define their experiences. This sounds rather dour! There is hopefulness, too—short stories can have the effect of a sharp shock, or a haunting sense of recognition, and I’m interested in whether there is also room for portraits of tenderness or humor to emerge without a story becoming saccharine. Although the stories are not autobiographical, the title story “Attrib.” perhaps reflects best many of my preoccupations and interests: how do you scrutinize something that is overlookable? How can you depict the effect of visual art through text? How can you smoothly narrate halting diffidence?

RGC: Can you describe your typical writing process? Did your experience writing Attrib. and Other Stories differ from writing Liar’s Dictionary?

EW: My novel involved writing a number of drafts and a good deal of fretful planning in terms of overall structure and character arcs. I would say that these individual stories were written in a more spontaneous way, in that I aimed to complete a full draft in one sitting and worked out how a story might be shaped as I went. This is not to say that the blank page became a story in one fell swoop, however; with both the novel and the collection, the majority of the writing process involved heavy (and often entirely wayward) research.  I knew that in “Bulk”, for example, I wanted the story to feature a dead whale on a beach, and I accrued about 30,000 words of jotted down or copy’n’pasted notes from a variety of articles, anecdotes, and books before I attempted to begin considering a putative plot. I suppose it’s a way of cheating oneself out of intimidating impostor syndrome—one is faced with a job of pruning or plucking choice parts from a thicket of words rather than seeking to start anything ex nihilo.

RGC: What drew you to the short-story format? What can a short-story collection do that perhaps a novel or a memoir cannot?

EW: I’m interested in moments, and that they can be momentous. A fleeting or glimpsed impression, or a double-take, might have resonances or consequences that can be explored through a novel or a longer work of prose but the brevity of a story means that the writer and reader can concentrate on the moment itself and concentrate on concentration. The story might focus on ignition, or destruction, or idling boredom, or ecstasy, and the short story form allows exploration within and of that instant.

RGC: Do you have a favorite story in this collection? Or is there one that stands out as particularly meaningful for you?

EW: The story “Alight at the Next” all takes place on an underground tube carriage, and involves confrontation, second-guessing, embarrassment, and noodling, disarrayed thinking. Part of the stereotype of the public transport in London is that it can be completely packed at rush hour, with everyone standing millimeters from each other, and it is always silent with no one catching one another’s eyes. Sometimes that’s understood as unfriendliness, but it’s also part of a shared feeling of “let’s just get through this, let’s just pretend the small indignities and frustrations and performances that make up a daily, swaying commute are not happening.” During the various lockdowns in the UK during the pandemic year, I have not been on the underground network for a year and it is odd to think of it not having that perpetual business and urgency as a space. Originally the story was written as a response to quiet bravery and queerness, but now I think it says more about sought-after proximities.

EW: I’m not sure it’s fun (or necessarily successful!), but I find I do write better when listening to something. Unfortunately, I find that I cannot listen to music with lyrics as I get distracted, however, or start singing along (badly), so the tracks I put together tend to be a mix of orchestral scores from films and videogames, or soundscapes of different landscapes and environments available from the British Library archive, where they have headings like “Fog Warning Sirens” and “Atmosphere: Deciduous Wood, English nature”. I’ll try and make it appropriate to the project, so if I’m writing what I want to be a tense scene involving louche ghosts in Italy, I might have tracks from “The Talented Mr Ripley” OST mixed with a field recording of Tuscan birds at dawn, followed by something from a jump-scare soundtrack. Let’s pretend its multisensorial immersive research, not another way of procrastinating.

RGC: If you were to pose one question to book clubs discussing Attrib. and Other Stories, what would you ask and why?

EW: One of the stories attempts to re-create the giddy feeling of being overwhelmed by a situation via a character’s encounter with a specific painting. Is that particular feeling replicated well on the page—through description, punctuation, formatting of words? And how could the limits of text have been pushed further to convey that feeling to the reader?