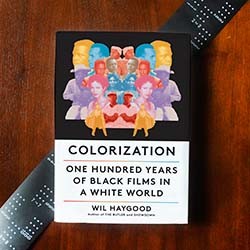 There’s nothing we love more than a good book-to-film discussion, so a book about films featuring films based on books is like a dream come true. Wil Haygood’s Colorization is a fascinating look at more than one hundred years of Black film history, featuring classic films and modern mainstream blockbusters alike.

Just in case you don’t know quite which film to start with after reading about so many in Wil’s book, he’s come up with a list of five films that are absolute must-watches. Keep reading for his recommendations—and click here to see a video of him speaking about each of these films.

IMITATION OF LIFE
Based on the novel Imitation of Life by Fannie Hurst, this film offers “a very heartbreaking, searing look at the interior of a Black family” by presenting a young woman who is “passing” as white and the effect that has on her relationship with her mother.

THE LILIES OF THE FIELD
In this historic film—for which Sidney Poitier became the first Black man to win a leading actor Oscar—”race is never mentioned. And that’s very interesting, because at the time the film came out in 1963, race was everywhere in American society.” The fable-esque story about an itinerant worker and a group of nuns is based on a 1962 novel by William Edmund Barrett.

SHAFT
There’s nothing like a good detective story—and until 1971, there was really nothing like Shaft, the film based on Ernest Tidyman’s book of the same name. “American audiences had been used to seeing white detectives. But now you had on a sixty-foot screen a Black detective who had a swagger about himself.”

DO THE RIGHT THING
Spike Lee is a director who needs no real introduction today, but his third full-length feature, Do the Right Thing, made him an icon to audiences of all races. “A film about race and ethnic rivalries . . . you see the rivalries and the misunderstandings between Italians and Blacks . . . that really helped ignite Spike Lee’s career.” Don’t miss the companion book penned by Spike Lee and Lisa Jones.

LEE DANIEL’S THE BUTLER
Inspired by Haygood’s Washington Post article “A Butler Well Served by This Election,” and subsequent book The Butler: A Witness to History, this “big, sweeping Civil Rights movie” holds a special place in Haygood’s heart: “I had a chance to meet the real-life butler that the character is based on in the movie.”