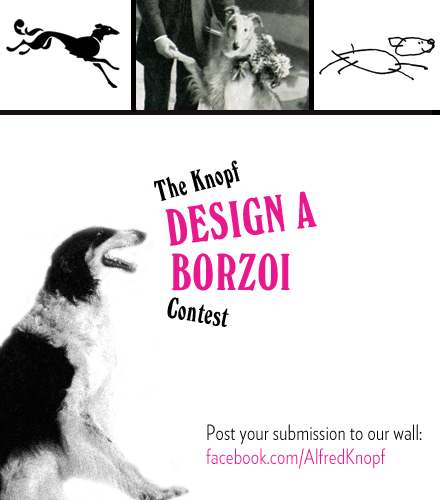 How did the borzoi come to represent Knopf? Said Alfred A. Knopf in 1948, “When I started in business the publisher I admired most was London’s William Heinemann, and the sign of a Heinemann book was a windmill, drawn for him, I think, by William Nicholson. Since a windmill obviously had nothing to do with books, I saw no reason why we could not adopt the Borzoi as our mark.”

Since then, the borzoi has taken on considerably more meaning. It’s become our logo, our calling card, our lucky charm, our way of telling you that the book you’re holding was published by Alfred A. Knopf Books, with all that entails. For every single kind of book Knopf publishes, it seems we have a matching borzoi: minimalist borzois, ornate borzois, borzois with toques. We never get tired of looking through all of them.

Now it’s your turn. Share your take on the Knopf borzoi with us! Doodle us a new dog, snap a photo of a borzoi in the wild, or bake us a borzoi babka. Whatever Knopf, our authors, or our books mean to you, channel it into a new borzoi and share the image on our Facebook wall. At the end of May, the most popular borzoi (as voted by our Facebook fans and our panel of judges) will be our profile picture for the summer. The winner will also receive a tote bag crammed full of summer reads from Alfred A. Knopf Books.

I. HOW TO ENTER

NO PURCHASE NECESSARY. Upload an image of your submission to the Alfred A. Knopf Facebook wall. The contest begins May 1, 2011, and final submissions are due by 11:59 pm (Eastern Daylight Time) on May 23, 2011. The five submissions with the most “likes” on the Knopf Facebook wall will enter the semifinal round beginning May 24, 2011. Semifinalists will be judged by the art and marketing departments at Alfred A. Knopf Books. A winner will be selected on May 31, 2011.

II. ELIGIBILITY
Contest is open to legal residents of the United States who are at least 18 years of age on May 1, 2011. All federal, state and local laws and regulations apply. Void wherever prohibited or restricted by law. Employees of Random House Inc., and its parent companies, subsidiaries or affiliates, and their immediate families and persons living in their household are not eligible to win this contest.

III. PRIZES
One (1) winner will receive a tote bag containing at least five titles published by the Knopf Doubleday Publishing Group. His or her winning submission will become the profile photo on the Knopf Facebook page from June 1 through August 30.

IV. WINNER
Winner will be chosen on or around May 31, 2011 from five semifinalists voted by fans of the Alfred A. Knopf Facebook page. The semifinalists will be judged by the Knopf Art and Marketing Departments staff, whose decisions are final, and the prize will be awarded on the basis of originality, style, and creativity. The winner will be notified on or around May 31, 2011 by email and may be required to sign and return affidavit(s) of eligibility and release of liability within 10 days of notification. A noncompliance within that time period or the return of any notification as undeliverable will result in disqualification and the selection of an alternate winner. In the event of any other noncompliance with rules and conditions, prizes may be awarded to an alternate winner. Taxes, if any, are the winner’s sole responsibility. RANDOM HOUSE RESERVES THE RIGHT TO SUBSTITUTE PRIZES OF EQUAL OR GREATER VALUE IF PRIZES, AS STATED ABOVE, BECOME UNAVAILABLE.

V. ADDITIONAL PROVISIONS
By participating, Winner agrees that Random House, Inc. and its parent company, assigns, subsidiaries or affiliates will have no liability whatsoever, and will be held harmless by Winner for any liability for any injuries, losses, or damages of any kind to person, including death, and property resulting in whole or in part, directly or indirectly, from the acceptance, possession, misuse, or use of the prize, or participation in this contest. Random House assumes no responsibility for any error; omission; interruption; deletion; defect; delay in operation or transmission; communications-line failure; or the theft destruction, unauthorized access to or alteration of entries. Random House is not responsible for any problems or technical malfunction of any telephone network or lines; computer online systems, servers, or providers; computer equipment or software; or failure of e-mail or entry on account of technical problems or traffic congestion on the Internet or at any Web site or combination thereof, including injury or damage to the participant’s or to any person’s computer related to or resulting from participating or downloading materials from this Web site or contest. By entering the contest, participants are consenting to the use of their name and submissions for publicity and promotional purposes on behalf of Random House with no additional compensation or further permission (except where prohibited by law).