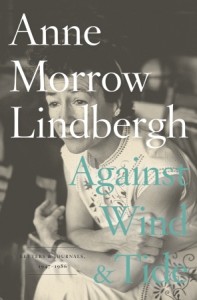 Why, as an eager and talented writer, has Anne Morrow Lindbergh published so relatively little in forty years of marriage?” asked reviewer John Barkham in 1970. “After a promising start with those first books on flying, she tapered off into long silences broken by an infrequent volume of verse or prose.” Many years later, Lindbergh replied with a quote from Harriet Beecher Stowe, who claimed that writing, for a wife and mother, is “rowing against wind and tide.”

In this sixth and final collection of Lindbergh’s diaries and letters, taking us from 1947 to 1986, we mark her progress as she navigated a remarkable life and a remarkable century with enthusiasm and delight, humor and wit, sorrow and bewilderment, but above all devoted to finding the essential truth in life’s experiences through a hard-won spirituality and a passion for literature.

Between the inevitable squalls of life with her beloved but elusive husband, the aviator Charles A. Lindbergh, she shepherded their five children through whooping cough, horned toads, fiancés, the Vietnam War, and their own personal tragedies. She researched and wrote many books and articles on issues ranging from the condition of Europe after World War II to the meaning of marriage to the launch of Apollo 8. She published one of the most beloved books of inspiration of all time, Gift from the Sea. She left penetrating accounts of meetings with such luminaries as John and Jacqueline Kennedy, Thornton Wilder, Enrico Fermi, Leland and Slim Hayward, and the Frank Lloyd Wrights. And she found time to compose extraordinarily insightful and moving letters of consolation to friends and to others whose losses touched her deeply.

More than any previous books by or about Anne Morrow Lindbergh, Against Wind and Tide makes us privy to the demons that plagued this fairy-tale bride, and introduces us to some of the people—men as well as women—who provided solace as she braved the tides of time and aging, war and politics, birth and death. Here is an eloquent and often startling collection of writings from one of the most admired women of our time.

Sign up for our First Lit mailing list for a chance to be one of 5 lucky winners who will be among the first to read this great new novel!

II. ELIGIBILITY
Sweepstakes is open to legal residents of the United States who are at least 18 years of age at the start of the sweepstakes, excluding all Random House and employees and affiliates. Entries received from persons residing in geographic areas in which entry is not permitted will be disqualified. All federal, state and local laws and regulations apply. Void wherever prohibited or restricted by law.

III. PRIZES
Five (5) first prize winners will each receive one (1) advanced reader’s edition of Against Wind and Tide by Noah Hawley. Approximate retail value of prize is $0.01. ALL WINNERS will be randomly selected.

IV. WINNER
All winners will be notified on or around the close of the sweepstakes. The winners will be notified by email and may be required to sign and return affidavit(s) of eligibility and release of liability within 10 days of notification. A noncompliance within that time period or the return of any notification as undeliverable will result in disqualification and the selection of an alternate winner. One prize per household. In the event of any other noncompliance with rules and conditions, prizes may be awarded to an alternate winner. Taxes, if any, are the winner’s sole responsibility. RANDOM HOUSE RESERVES THE RIGHT TO SUBSTITUTE PRIZES OF EQUAL OR GREATER VALUE IF PRIZES, AS STATED ABOVE, BECOME UNAVAILABLE.

V. ADDITIONAL PROVISIONS
Random House assumes no responsibility for any error; omission; interruption; deletion; defect; delay in operation or transmission; communications-line failure; or the theft destruction, unauthorized access to or alteration of entries. Random House is not responsible for any problems or technical malfunction of any telephone network or lines; computer online systems, servers, or providers; computer equipment or software; or failure of e-mail or entry on account of technical problems or traffic congestion on the Internet or at any Web site or combination thereof, including injury or damage to the participant’s or to any person’s computer related to or resulting from participating or downloading materials from this Web site or sweepstakes. By entering the sweepstakes, participants are consenting to the use of their name for publicity and promotional purposes on behalf of Random House with no additional compensation or further permission (except where prohibited by law), and may be contacted by Random House for further promotions.

VI: WINNERS LIST
For the names of the winners, available after the sweepstakes has closed, please send a stamped, self addressed envelope to: First Lit Sweepstakes, 1745 Broadway, Mail Drop 13-1, New York, NY 10019.