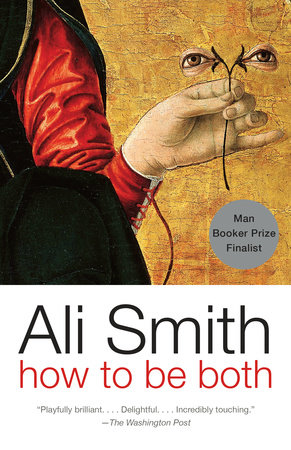 How to be both

The questions, discussion topics, and reading list that follow are intended to enhance your reading group’s discussion of How to be both, the playfully experimental, emotionally wrenching, and aesthetically inquisitive two-in-one novel by Ali Smith, which juxtaposes the stories of two young women from different centuries and different countries to explore the intrinsic values of art in the shaping of one’s identity.


1. One of the many unique things about How to be both is the fact that the book has been printed in two ways, half with the section “Camera” preceding “Eyes” and half the other way around. Discuss among the members of your group (or, if you read this yourself, imagine) the way your experience of the novel as a whole was different depending on which section you read first. How does this first impression influence your ability to imagine the experience of the reverse order, too, or if you were to read the novel again the opposite way? Do you think one order is stronger than the other, and if so why?

2. What are some of the types of dualities or binaries explored in the novel, implicitly and explicitly? When characters are aware of them, does that recognition of a thing or scenario as being “both” lead to greater clarity or greater ambiguity?

3. Compare the first-person voice of Francescho with the third-person voice of George. How do these narrative differences reflect each of their characters as well as the question of what it means to see vs. seen?

4. Both George and Francescho lose their mothers in adolescence. How does that absence influence their (young) adult identities, including with respect to their femininity/gender? How do they each try to preserve their mother via their own creations? Consider the main ways that they represent themselves in the book and in the world, such as how they dress and even their first names and variations thereof, and how successful they are in altering their genders.

5. How do the two fathers in the book shape their children’s identities—their daughters’ and sons’ alike?

6. What kind of comforts and challenges do the young boys—George’s brother and Francescho’s assistant—present to these characters?

7. Francescho and George both have extreme first impressions of sex, via the “house of pleasure” and pornography, respectively. How do you think this explains, affects, or might be intrinsic to their complicated sexual identities and romantic interests in their stories?

8. The major piece of connective tissue between the two parts of the novel is George’s mother’s love of a painting by Francesco del Cossa, whom we meet/have met as the narrator in “Eyes.” Besides this crucial narrative tie, how do painting and frescoes in particular inform themes of love and memory in the two parts?

9. How do you think George’s mother’s impression of the del Cossa’s Saint Vincent painting would change if she knew the artist’s story, or even met him, as we do in the novel?

10. In what way does Ali Smith play with experimental aesthetic forms in her construction of How to be both? How are other female innovators (most unacknowledged by history) featured in the novel?

11. Do George and Francescho “speak” as differently as you’d expect for characters separated by over 500 years and from different parts of the world? How does Smith illustrate through their language their own self-awareness? Which do you think has more command over her/his expression, linguistically and/or visually?

12. How does George’s relative freedom/mobility, even at a young age, in her present-day setting affect her ability to grieve and pursue her curiosities in ways that were unavailable to or more difficult for Francescho?

13. The five epigraphs of the novel share a theme of the connection between creation and destruction. How does this idea manifest itself in the novel? Consider Francescho’s citation of Alberti’s idea that “the process of drawing and painting outwits death and you draw any animal by isolating each bone of the animal, and on to this adding muscle, then clothing it all with its flesh : and this giving of muscle and flesh and bones is what in its essence the act of painting anything is.”

14. One of George’s many intellectual obsessions is etymology, and at one point Mrs Rock explains to her the original meaning of the word “mystery”: “a closing, of the mouth or the eyes. It meant an agreement or an understanding that something would not be disclosed.” How and when does this word and/or original meaning come up in “Eyes”?

15.  George also defines “helix” as “Greek for twist.” How did encountering this definition influence your reading of the helix-shaped verse sections that open and close the “Eyes” sections, including depending on which section you read first? How did your understanding of the closing helix change after you had read the entire section and knew more about Francescho’s aesthetic?

16. One of the paintings that George and H see by del Cossa of the Annunciation features a snail at the bottom “crossing as if it’s a real snail crossing a picture. The snail shape is nearly the same as the God shape [with] a perfect spiral in the shell.” What does this image represent about the novel as a whole and its central themes?