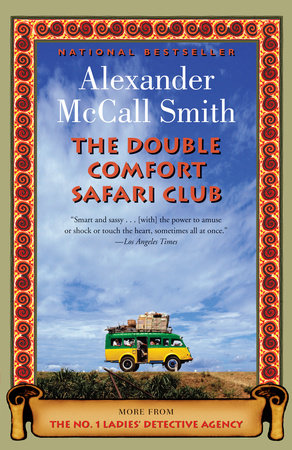 The questions, topics, and other material that follow are intended to enhance your group’s conversation about The Double Comfort Safari Club, the latest installment in Alexander McCall Smith’s beloved series, The No. 1 Ladies’ Detective Agency.


1. Mr. J.L.B. Matekoni thinks of himself as less clever than his wife. What happens in the opening scene that proves him to be as observant and intuitive as Mma Ramotswe herself (pp. 7–14)?

3. Botswana is more than just a setting in these stories. Mr. J.L.B. Matekoni thinks about the country as he drives to the aid of Mma Mateleke (p. 4), while Mma Ramotswe thinks about her father’s Botswana “in which young people had shown respect for older people” (p. 34). What does Botswana represent, for Mma Ramotswe particularly?

4. Mma Makutsi challenges the patience and kindness of Mma Ramotswe often in this novel. How does Mma Ramotswe respond to Grace’s suggestion about switching teapots? Why does she buy Grace a new pair of boots?

5. “How to Love Your Country Again” is a chapter that appears not to advance the plot. What is the purpose, then, of this seeming pause in the story? What are some of the observations and reflections here that provide insight into Mma Ramotswe’s character?

6. What is at stake in the struggle between Grace and Phuti’s aunt? Do you find Phuti’s timidity disturbing as the story goes on? Is this an aspect of his character that Grace fully accepts?

7. What is the lesson of the visiting priest who gives the sermon in the cathedral? Why does Mma Ramotswe change her mind about telling people not to weep (pp. 67–68)?

8. Mma Ramotswe defines wisdom as “an understanding of the feelings of others and of what would work and what would not work; which stood by one’s shoulder and said this is right or this is wrong, or this person is lying or this person is telling the truth” (p. 34). What do you think of this definition of the term? Is wisdom the key to her success as a detective?

10. When Precious and Grace travel to the Okavango Delta, several comic scenes develop. What are some of your favorite funny moments during their trip?

11. Mma Ramotswe has been hired to find an unnamed guide at a safari camp, to whom an American woman has left a large amount of money. A coincidence—two women named Mrs. Grant—causes Mma Ramotswe to tell the wrong man he will receive the bequest. But another coincidence resolves the difficulty (pp. 187, 194). Would you consider this outcome a matter of plot manipulation or a plausible situation, given the closeness of kinship ties in a place like Botswana?

13. In most detective fiction, readers seek the identity of the criminal or the resolution of a mystery. Who is the guilty party, and what if anything is the mystery, in The Double Comfort Safari Club? How does Mma Ramotswe differ from most fictional detectives? How do plot and pace differ, and what other unique features distinguish the No. 1 Ladies’ Detective Agency series from other detective fiction?

14. How does Mma Ramotswe figure out what is going on in Mma Mateleke’s marriage? How well does she manage her tricky conversations with the husband and the wife?

15. The novel’s ending brings a happy reunion of Grace and Phuti, who says that Grace will be “Mma Radiphuti . . . very soon now” (p. 210). Do you expect that the marriage will take place in the next installment?