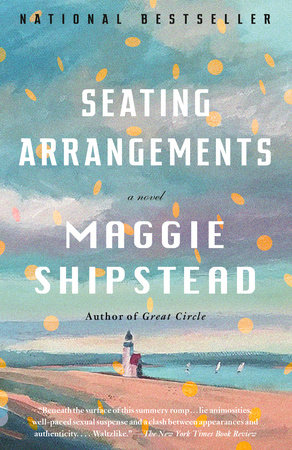 The questions below are intended for use in facilitating discussions of Maggie Shipstead’s novel Seating Arrangements in which a romantic three-day wedding weekend on an idyllic New England island erupts in a summer blaze of adulterous longing and salacious misbehavior as the bride and groom find themselves presiding over a spectacle of marital failure, familial strife, and monumental loss of faith in the rituals of American life.


1. “The river bears no empty bottles, sandwich papers, / Silk handkerchiefs, cardboard boxes, cigarette ends / Or other testimony of summer nights. The nymphs are departed. / And their friends, the loitering heirs of City directors; / Departed, have left no addresses.” This is the novel’s epigraph, from “The Wasteland,” T. S. Eliot’s epic poem of ruin and desolation. How does this verse relate to Seating Arrangements? Why has the author elected to place it at the front of her novel?

3. How is Daphne different from her father? Is her world view different or is it the same? How do Daphne’s and Livia’s values differ?

4. Discuss Dominique’s role in Seating Arrangements. How is she different from the other characters in the novel, and how does this alter the reader’s perspective?

6. On page 164, Biddy draws herself a bath and spends a quiet moment reflecting on her predicament and her marital expectations after Winn’s inescapably obvious attentions to Agatha following her fall from the deck. “The obviousness was what she could not tolerate. She had known what she was when she married him, had expected to be the kind of wife who looked the other way from time to time, but she had also expected him to be discreet. And he had been. She assumed there had been other women, but she had never come across any evidence of them, which was all she asked. A simple request, she had thought: cheap repayment for her forbearance, her realism, her tolerance. At times his discretion had been so complete she had allowed herself to believe maybe there hadn’t been others, but she didn’t like to risk being foolish enough to believe in something as unlikely as her husband’s fidelity.”  What is Biddy’s view of marriage? Does the author share this view? Do you? Is fidelity essential to a good marriage? What exactly is a good marriage, in your view? In Shipstead’s?

7. Aunt Celeste brings levity, acerbic wit, and a rather dark personal history to a host of subjects that are often treated sanctimoniously, among them, romantic love and the possibility of living happily ever after. What is Celeste’s contribution to the Van Meter family, and to the novel as a whole?  What is your opinion of her? The author’s?

8. In what way does the Duff family differ from the Van Meter family?  How are they aware of their differences, whether social, financial, or historical?  Do you think the author is pointing out their differences primarily, or their similarities?

9. On page 170, Winn recollects a story he was told one night at the Vespasian, while still a young man, about his grandfather’s inheritance. How is this story significant, and how has it informed the truths and myths of his family history?

10. In chapter eleven, Livia and Francis have a fascinating conversation in which the author provides several nuanced reflections on varieties of love: maternal, filial, familial, romantic. How do these ruminations embody—or shape—our perception of love and its obligations, in the world of Seating Arrangements and in the world at large?

11. Following the aforementioned conversation, Francis says to Livia, “Another reason I like you is that I think we have similar roles in our families. We’re the critical ones. We represent a threat to their way of life, a new order.”  What does he mean? How, in particular, might Livia be perceived as a threat to her family’s way of life?  Is she more or less of an iconoclast than her aunt Celeste?

12. Discuss the debacle of Winn’s bridal toast in which he equates marriage with death. Do you think the author intends the reader to perceive this as farcical or tragic?

13. Look at the end of chapter seventeen, which closes with Livia listening to her parents in their bedroom and the line, “Their door shut behind them, and she heard the murmur of their voices, the unknowable language they spoke only to each other.”  How does this recast our sense of Winn and Biddy’s marriage?

14. Discuss the epilogue and, in particular, the final image of Daphne and Winn dancing. What note does the author strike at the novel’s conclusion?  How has the novel, and the family, recovered from its various catastrophes and regained its balance after the tawdriness of the events that preceded it and the spectacularly deflating effect of the patriarch’s wedding toast?  Is this a happy ending? Do you think the author intends it to be so?

15. Is it surprising, given the novel’s themes and its central voice—an older, patrician male—to discover that its author is a twenty-eight-year-old woman?  Why or why not?