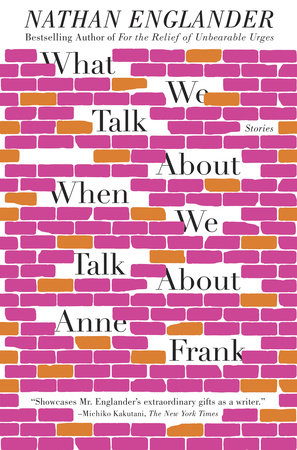 The questions, discussion topics, and author biography that follow are intended to enhance your group’s reading of Nathan Englander’s What We Talk About When We Talk About Anne Frank.


1. The narrator of the title story suggests that his wife’s preoccupation with Holocaust survivors is excessive.  “And Deb has what can only be called an unhealthy obsession with the idea of that generation being gone. Don’t get me wrong. It’s important to me, too. I care, too.  All I’m saying is, there’s healthy and unhealthy, and my wife, she gives this subject a lot, a lot, of time.”  How do you feel about this? Later, the narrator suggests that Deb was disappointed by the story about the two survivors meeting years later in the locker room in Florida because she was expecting something that would “reconfirm her belief in the humanity that, from inhumanity, forms.”  What does it mean to have an unhealthy obsession with the Holocaust?  How do you feel about Deb as a character?

2. Yerucham and Shoshana used to be called Mark and Lauren, before they became ultra-Orthodox. Early in the title story, though, Shoshana confides, “We still get high. . . . I mean, all the time,” and that, in relation to traveling with drugs, “it’s pretty rare that anyone at customs peeks under the wig.”  What do you think Nathan Englander’s point of view is about religious Orthodoxy? What point is he trying to make?

3. Appearance and reality, secrets and hidden truths, are themes in the title story. These are approached comically, at first, when Deb and her husband discuss Trevor, and the discovery Deb had made and kept a secret. “But he’s the son. . . . I’m the father. Even if it’s a secret with him, it should be a double secret between me and you. I should always get to know—but pretend not to know—any secret with him. . . . That’s how it goes. . . . That’s how it’s always been. . . . Hasn’t it?” What is at stake here? Why does the narrator suddenly feel “desperate and unsure”? What fears are gathering force in this moment?

4. The idea above—the possibility that we don’t know our spouses, or even ourselves, and that perhaps our lives are something quite other than what we believe them to be—is echoed with powerful, indeed tragic, implications at the story’s conclusion. Discuss the terrible parlor game the couples play in the story’s final pages. What do the couples learn about one another? About themselves? How does this change your understanding of each character and the portraits the author had painted of them in the story’s opening pages?

5. The story “Sister Hills” is divided into four discrete sections. Why? Discuss how the story’s structure relates to its themes.

6. “Sister Hills” can be read as a political allegory based on the story of a bargain struck in order to save the life of a critically ill child.  In this reading, who or what does the child represent, and what meaning can be inferred from the exchange of money? What is the relevance of the two mothers?

7. Rena changes dramatically over the course of “Sister Hills.” Describe her journey and discuss the difference between her true relationship with Aheret and the way the young couple perceive the nature of their relationship at the story’s end. What point is the author trying to make through his use of irony here, and how does this irony relate to the story as a whole?

8. What statement, in “Sister Hills,” is the author trying to make about the history of the Israeli settlements? What do you think the author believes about their cost? About their fate?  Look in particular at pages 64 to 66, where Rena discusses with the rabbis the nature of a contract, both symbolic and real, and the nature of justice.

9. How does the story of Masada relate to the story of Zvi Blum and the bully known as the Anti-Semite in “How We Avenged the Blums”?

10. On page 88 of the story above, Englander writes, “We weren’t cohesive. We knew how to move as a group but not as a gang. We needed practice. After two thousand years of being chased, we didn’t have any hunt left in us.”  What does he mean? How is he suggesting Jewish history relates to the fate of these neighborhood boys and their plight?

11. “How We Avenged the Blums” concludes with a powerful image of a circle of boys clustered around the Anti-Semite, and the narrator’s unexpected insight about the nature of helplessness and power, dignity and victimhood: “As I watched him, I knew I’d always feel that to be broken was better than to break—my failing.” What does he mean? And why does he consider this his failing?

12. At the start of “Peep Show,” Allen Fein reflects on his transformation. “He had only wanted a peep. He’d gone up the stairs a loyal husband and lover, a working man on his way home to the burbs. And now, minutes later, a different man emerges: a violator of girls and wives and matrimonial bonds.”  Then, when the partition rises and unexpectedly reveals a rabbi, Allen muses: “Where the rabbis are involved, there is always a path to be followed. Either you stay on it or you stray into darkness: This is the choice they offer. And, much as Allen feels bitter and lied to for all these years, he half wishes he could live in their realm, where a man is religious or he is not, a good husband or bad.”  How are these two moments related? What is the author saying about the nature of identity, morality, and truth?

13. How is “Everything I Know About My Family on My Mother’s Side” different from the other seven stories in this collection, thematically and tonally? Did you feel it was more personal, intimate? Why do you think the author chose to narrate this story in the first person?

14. “Camp Sundown” is a story about vigilante justice undertaken by a group of geriatric campers at a bucolic summer retreat.  Discuss the author’s views on guilt and innocence. Look in particular at the passage on page 166, where one of the campers confronts the director and implores, “It’s your choice, Director. You take one crime to bed with you every evening; take a second one tonight.” What is happening in this scene?

15. What do you think the director should have done in “Camp Sundown”? What should the campers have done? Why?

16. “The Reader” is an exploration of the relationship between authors and readers. Is there a social contract between writers and readers? What is an author’s responsibility to his or her reader?

17. Discuss the contrast between the narrative form of “Free Fruit for Young Widows,” in which a father is lovingly recounting a story to his son, and the story’s actual substance. How does this dissonance contribute to the story’s power? What is the significance of the comment Etgar’s father makes when Etgar is twelve: “Do you want to know why I can care for a man who once beat me? Because to a story, there is context. There is always context in life.”

18. In “Free Fruit for Young Widows” Englander distinguishes between two kinds of survival, saying that Professor Tendler “made it through the camps. He walks, he breathes, and he was very close to making it out of Europe alive. But they killed him. After the war, we still lost people. They killed what was left of him in the end.”  What does he mean?

19. At the heart of several of these stories is the relationship between religious orthodoxy and contemporary American culture. How do you think the author views religion and issues of faith and belief?

20. The title story, “Sister Hills,” and “Free Fruit for Young Widows” all pivot around incidents within Jewish history, and the question of how essential stories—stories that define us, that shape both our understanding of the past and our vision of the future—are told and retold over the course of many years. What do you think Englander is suggesting about history, tradition, and storytelling itself?

21. Many of the stories in this collection are comic in tone, despite the tragic nature of Englander’s dramatic predicaments.  How does humor serve the author’s intentions? How does it express his view of life?