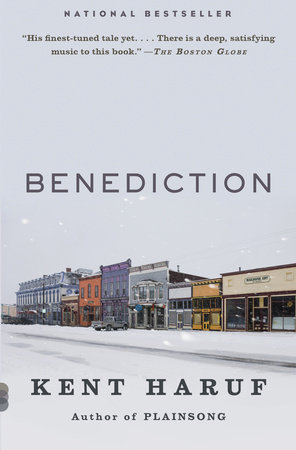 The questions, discussion topics, and reading list that follow are intended to enhance your reading group’s discussion of Benediction, a story of life and death, and the ties that bind, by the best-selling and beloved author of Plainsong and Eventide.


1. Two of Haruf’s previous novels set in Holt, Plainsong and Eventide, followed the same groups of characters, but Benediction mentions them only in passing. Have you read those two novels? Do you think reading them would increase your enjoyment of Benediction?

2. The book’s epigraph is a definition of the word “benediction”: “the utterance of a blessing, an invocation of blessedness.” Why is it an appropriate title for this novel?

3. Discuss the character called Dad. Why do you think Haruf gave him that name? What does it signify?

4. What do we learn about Dad from the episode with Clayton? Why does Dad hallucinate a visit from Clayton’s wife?

5. There are many parental relationships in the novel: Dad and Mary and Lorraine, Willa and Alene, Lyle and John Wesley, for example. What makes some stronger than others?

6. Alice has many substitute mothers. Why do so many of the women want to take care of her? Who does she seem to respond to best?

7. One parental relationship in particular haunts the story: Dad and Frank. How does Dad feel about Frank at the end?

8. On page 43, Lyle counsels a couple who want to get married: “Love is the most important part of life, isn’t it. If you have love you can live in this world in a true way and if you love each other you can see past everything and accept what you don’t understand and forgive what you don’t know or don’t like.” How does this relate to his own life?

9. Why is Lyle’s sermon so inflammatory? What point is Haruf making about religion?

10. When Lyle goes out walking at night, he says he’s in search of “the precious ordinary.” (Page 162) What does he mean by that?

11. After Mary goes to Denver in search of Frank, she’s treated kindly by several strangers. What does this tell us about Mary, or about city life?

12. Lorraine has lost a child and is in an unfulfilling relationship. Do you think she’ll be happy to move back to Holt and take over Dad’s store? How do you imagine that will go?

13. Change is a theme that runs through the novel—fast change, slow change, changes in small-town living, changes in religion, changes in characters’ relationships. What larger point is Haruf making?

14. Why does John Wesley attempt suicide? Why doesn’t he go through with it?

15. What does Dad learn from the “visits” by his parents and Frank? Does Dad have regrets about his life?

16. Reread the closing paragraphs of the book. Why does Haruf end the novel this way?

17. Haruf’s language and punctuation are so plain, the writing is nearly austere. How does its simplicity contribute to the mood of the story?

18. In an interview in Publishers Weekly about Benediction, Haruf said: “In some ways, what happens in Holt happens in Denver, in Minneapolis, everywhere. Death is a fact of life, no matter where you live. Taking care of the dying is a necessity everywhere. Those are not conditions exclusive to small towns.” Did he succeed in making his story feel universal?