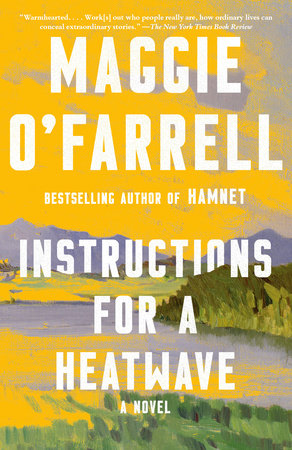 Instructions for a Heatwave

The introduction, author biography, discussion questions, and suggested reading that follow are designed to enhance your group’s discussion of Instructions for a Heatwave, the mysterious and riveting new novel by Maggie O’Farrell.


1. The weather referenced in the novel’s title refers to the setting but also takes on symbolic or metaphorical significance. O’Farrell writes that “strange weather brings out strange behavior . . . [People] start behaving . . . not so much out of character but deep within it” (p. 103). What does she mean by this? Where do we see examples of this among the characters? How does the heat enhance or mirror the psychological drama of the story?

4. When we are introduced to Michael Francis, we find him thinking that “[h]e is, for a moment, exactly the person he is meant to be . . . There is no difference . . . between the way the world might see him and the person he privately knows himself to be” (p. 13). What does the author mean by this? Where do we find discrepancies in the book between who a character really is and who others see the character to be? What causes this dissonance?

5. Examine the various representations of family and family structures in the book. Are they very similar? What does this tell us about marriage and family? About the characters? Most of the characters are, or have been, married. What were their reasons for marrying? How is marriage represented in the story? Are these unions mostly successful? What makes them successful or not?

6. Why is Michael Francis so upset by his wife’s haircut and enrollment in history classes?

7. Pregnancy and birth are recurring subjects in the book; the loss that can be associated with them is also explored. Evaluate the scenes that portray pregnancy and birth: Gretta’s births, Monica’s loss, Michael Francis’s children, and Aoife’s pregnancy. What message does the novel seem to present about birth?

8. Whose fault is it that Monica’s secret was found out? How did Monica respond to the secret being revealed to her husband? What is your reaction?

9. The characters reflect throughout the book on various events from their childhoods. What were some of the more memorable events, or events that had the greatest impact on them? What do these revelations seem to indicate about the impact of the past and its relationship to the present?

10. Consider the various conflicts in the novel. There is the problem of Robert’s disappearance, but other conflicts also begin to surface. Are these conflicts resolved? If so, how? How does the larger conflict unite or divide the characters? How does each character respond to conflict?

12. Evaluate the style of the book. Is O’Farrell’s language simple or difficult or complex? What about the sentence structures? How does her style of writing work to create a sense of portraiture, albeit with words?

13. Analyze O’Farrell’s use of flashbacks as a literary device. The characters are constantly recalling moments and events from the past. This allows us to know the unknowable. What insight does it give us into the characters? What does we learn about subjects such as memory, history, and truth?

14. Gretta tries to “keep Ireland alive” (p. 6) through trips to Ireland, Mass and communion, her cooking, and other customs. How do her children respond to her efforts? How does the book create a portrait of the complexities of tradition versus modernity? The characters are all living in different places–different countries, even. What might this say about contemporary living and the modern family?

15. Consider the sense of time in the book. The story takes place over only a few days, yet we get a sense of the entire history of each character from childhood to the present day. How does O’Farrell accomplish this?

19. What does the novel tell us about tragedy and the ways in which we face tragedies? Does each character respond in the same way? Does the way that the characters deal with tragedy change throughout the story?

20. How does this novel compare to O’Farrell’s other works? What are some of the recurring themes? Is their treatment similar? Are there recurring character types or plotlines?