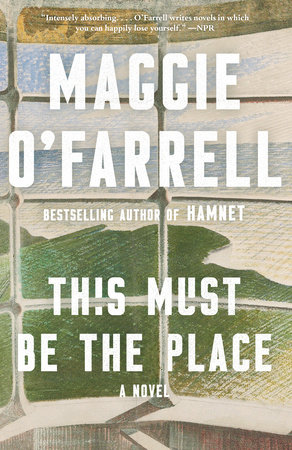 This Must Be the Place

The questions, discussion topics, and reading list that follow are intended to enhance your reading group’s discussion of This Must Be the Place, the dazzling new novel by Maggie O’Farrell, acclaimed author of The Vanishing Act of Esme Lennox.


1. For an epigraph, O’Farrell selected a quote from a poem by Louis MacNeice: “World is crazier and more of it than we think, / Incorrigibly plural.” What does this mean? Why do you think she chose it?

2. We see various parts of the story through the eyes of more than a dozen characters, jumping back and forth in time. How do their points of view build on one another?

3. Daniel introduces Claudette to readers by saying, “My wife, I should tell you, is crazy” (page 5). Now that you’ve read the entire novel, do you believe he means this?

4. Why does Daniel’s hearing Nicola Janks’s voice on the radio set the entire story in motion?

5. On page 31, Daniel thinks, “That same feeling of dislocation between what you thought you were doing and what you actually did envelops me as I sit there, as I press my elbows into the surface of my desk. All along I’d thought my life had been one thing, but it now seems it might have been something else entirely.” What does he mean? Is he right about that?

6. The first chapter from Claudette’s perspective, “I Am Not an Actress,” is told from the first-person plural and second-person point of view. Why do you think O’Farrell chose to tell that portion of the story like that? What effect does it have?

7. What does Niall’s eczema symbolize?

8. On page 59, Phoebe describes her feeling of dissociation, “Like I’ve been cut down the middle and I’m in two places at once, or I’m getting radio interference from somewhere, or I’m just a shadow.” On page 361, Marithe describes a similar sensation. Aside from sharing a father, what is the connection between the girls?

9. What do we learn from the auction catalog of Claudette’s memorabilia?

10. When Myrna advises Daniel to go home—“ʻLeave whatever this is alone. What can be gained from turning over old coals?’” (page 118)—why doesn’t he listen? What could have changed if he had?

11. Several chapters are told from the perspective of minor characters, such as Lenny and Maeve. How does this reset your understanding of what’s happening?

12. Pascaline describes Daniel as “someone who is so . . . different on the inside from how they are on the outside” (page 134). What does she mean by that?

13. Why does Daniel’s career as a linguist, studying the way language changes, matter to the story? What does it tell us about his character?

14. What propels Daniel to track down Todd?

15. Why didn’t Todd give Daniel’s letter to Nicola?

16. How does Teresa’s story affect your understanding of Daniel’s behavior? What purpose does her story serve in the novel as a whole?

17. On page 249, Ari describes his stammer as being like an iceberg, “ʻOnly a small part of it is visible, while under the water is a large, jagged, dangerous mass of ice.’” What else in the novel might be described this way?

18. Grief affects some characters more profoundly than others. What similarities do you see in how Daniel and Niall dealt with Phoebe’s death? And differences?

19. Why does Claudette react the way she does when Daniel tells her about Nicola?

20. In the interview transcript, Timou tells the interviewer that Claudette ran away because of “you.” “ʻNot you personally but what you stand for. You are the synecdoche for what she ran away from’” (page 314). What does this mean?

21. Rosalind’s chapter, “Always to Be Losing Things,” reads almost like a stand-alone short story. Why do you think O’Farrell chose to add another layer to the novel? What do we learn here?

23. Siblings—step-, half, full—play major roles in the novel. How might things have been different if, say, Lucas wasn’t always there for Claudette, or Ari didn’t eventually gain siblings of his own?

24. Toward the end of the novel, Daniel disarms Claudette by complimenting her on her parenting. Why does this have such an effect on her?